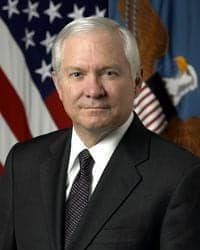 Former Secretary of Defense and newly elected Boy Scouts of America president Robert Gates said in an interview on Friday that he would have pushed for openly gay adults to be allowed the organization had he been in charge when BSA leadership made the controversial decision to end its ban on openly gay youth (but not gay adults) last year.

"I was prepared to go further than the decision that was made," Gates told The Associated Press in an interview in advance of a speech before the group's national leaders at its annual meeting in Nashville, Tennessee. "I would have supported having gay Scoutmasters, but at the same time, I fully accept the decision that was democratically arrived at by 1,500 volunteers from across the entire country.

Gates, who oversaw the end of the military’s “Don’t Ask, Don’t Tell” policy in 2011, sees welcoming gay youth into Scouting as an important step forward – but said he opposes any further attempts to address the policy now.

"Given the strong feelings — the passion — involved on both sides of this matter, I believe strongly that to re-open the membership issue or try to take last year's decision to the next step would irreparably fracture and perhaps even provoke a formal, permanent split in this movement — with the high likelihood neither side would subsequently survive on its own," Gates said in prepared remarks.

A handful of anti-gay conservatives who opposed the inclusion of openly gay boys have already started their own Mike Huckabee-approved scouting alternative: Trail Life USA.