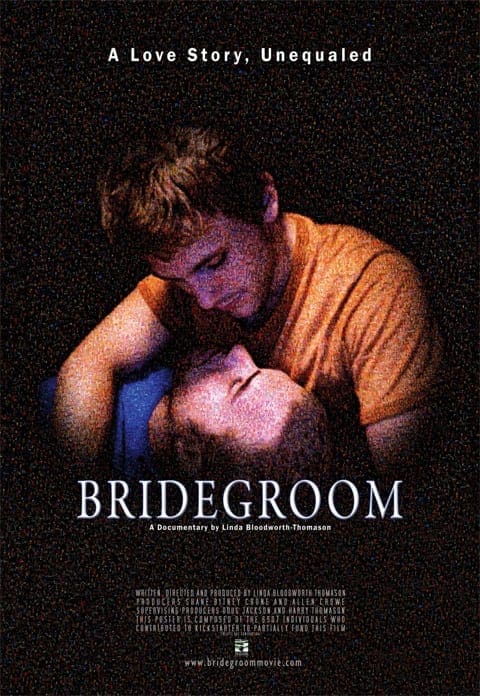 Towleroad readers should be familiar with Bridegroom, the documentary directed by Linda Bloodworth Thomason and produced by Shane Bitney Crone and Allen Crowe in response to the accidental death of Shane's boyfriend Tom Bridegroom.

After Shane's YouTube video, "It Could Happen To You", went viral, a producing team led by director Bloodworth Thomason sought funds on Kickstarter for a documentary about Tom's story, a Kickstarter which broke records at the time for the fundraising start-up, raising more than $384, 375. The project was funded on July 19, 2012.

The resulting film, Bridegroom, hit the festival circuit and screened on Oprah's OWN network.  But a large number of Kickstarter supporters, who were promised rewards ranging from DVDs to phone calls and dinners with the producers, have received nothing.

Writes one supporter to Towleroad:

I, along with many others who helped fund the movie, have yet to receive any sort of reward, or even contact, from the Bridegroom producers. Personally, I e-mailed them 4 times since February and even called once and not one person has replied to my requests to learn more about the status of the DVDs and other rewards we were promised when we helped to provide the money that got the film off the ground. You can see on the website that it's not just me, but a large number of supporters, including those who funded at the $500 and $1000 levels.

It's been nearly two years since the campaign for Bridegroom was funded by people like me who believed in the film and it's gone on to become one of the biggest gay documentaries that's been released, having won many festival awards, been put on Netflix, and even been promoted by Oprah. Thought it might be newsworthy that, in the midst of all the success they've had, the producers of this gay film can't seem to be bothered to even acknowledge their supporters.

A list of angry notes on the film's Kickstarter page from jilted supporters dating back to November backs up the claims.

Towleroad has reached out to Bloodworth Thomason and Bitney Crone for a response.

UPDATE: The Bridegroom producers have provided us with the following update, which is going out to backers of the Kickstarter project….

Dear Bridegroom supporters, We appreciate the patience and restraint you have shown us regarding the delay of your rewards.

While BRIDEGROOM's director Linda has moved on to other projects including one very important feature film concerning the LGBT community and Shane has been traveling non-stop to make sure other nations and cultures are exposed to his inspiring story, I have been trying to take care of the reward problems and frankly, not doing a very good job. The biggest part of the problem is that we have to balance the number of rewards we can send out in any given week with other commitments we have to pay to make sure we can get it in front of as many people and nations as possible, which I believe almost all of you agree is for the greater good.

As I have explained before we were able to raise only about 50% of the amount needed on Kickstarter to make this documentary. We were rushed to get the film out when we did to help the national push for equality. As a result, the distributor of the film had to first recover some of the funds they advanced to finish the picture. Also, it may come as a surprise that a lot of the venues where streaming rights, etc. are sold do not pay money up front but rather do it quarterly (sometimes up to 12 quarters – 3 years). We are still awaiting the first check for this film. We believe it will be remitted soon, but unfortunately we will probably still be meager for this quarter. Of course not one soul on our team made this film anticipating making a profit on the tragedy of BRIDEGROOM.

I want to thank the hundreds of you who have contacted us by email or phone to say you didn't want rewards, you just wanted to get the picture out. While we appreciate it, we want and will make sure you still get what we pledged to you.

We earlier posted a phone number, (xxx)xxx-xxxx, that you could call and contact me directly. To our knowledge, we have never purposely ignored a phone call from you – If someone doesn't answer, please call again and ask for me.

For weeks now there have been very few days that go by that we have not sent out rewards – a one man staff has sent out nearly three thousand packages to date and with the arrival of the other material we need over the next few days the pace to the finish will quicken. We have underestimated the time it would take to deliver your rewards before, so if you don't receive them within the next 4 weeks (at the latest), please call me.

Again, thank you for your tremendous help and dedication.

We appreciate the producers' quick response to us here at Towleroad. We've been longtime supporters of this film and it is nice to see a proactive response to those who have backed it.