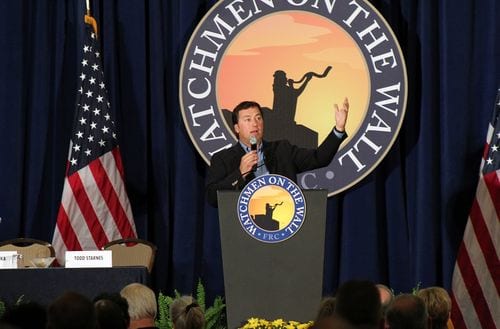 At a conference earlier this week sponsored by the anti-gay hate group Family Research Council, Duck Dynasty star Alan Robertson praised his father Phil Robertson as a ‘21st century prophet’ for his comments in December comparing homosexuality to bestiality and saying homosexual sinners were going to hell like terrorists, prostitutes, and drunks.

Alan, a guest speaker at the Family Research Council's "Watchmen on the Wall 2014" event on Thursday, addressed a crowd of hundreds of pastors to encourage them to continue preaching the Gospel without compromise – much like his family is known to do on their show.

"My dad has the heart and mindset of a prophet and is most compared to John the Baptist … for speaking the truth in a culture that isn't prepared to hear truth," Alan said. "That doesn't change my dad's view at all. Prophets tend not to care about their public image. They tend to talk about their judgment as if it's real and they speak what God gives them to speak … so he is, in that sense, a 21st century prophet."

In an Easter Sunday sermon last month, Phil Robertson blasted the media for scolding him about his anti-gay remarks, accused them of being ignorant of the Bible, and reiterated what he said about gays.

You can watch Alan’s full speech at the FRC conference (if you’re so inclined) here.