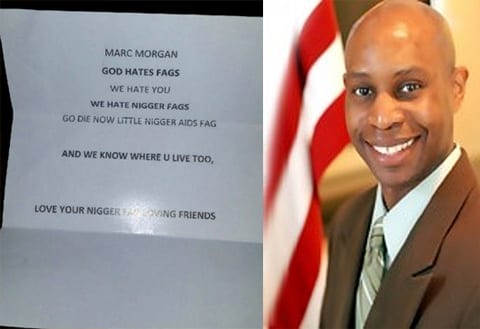 Marc Morgan, an out gay candidate for the D.C. Council, received a threatening letter in the mail, Metro Weekly reports:

Morgan, a Republican running for the At-Large seat on the Council being vacated by Independent David Catania, sent Metro Weekly a photo of the letter, which he says was stuffed into his mailbox sometime between midnight Wednesday night and 10 a.m. on Thursday morning. He says he grabbed the unopened letter out of his mailbox and took it with him as he was traveling to work this morning, but did not immediately read it. Later, he opened it to discover the letter’s contents.

Read the letter in the image above.

Morgan received several anti-gay tweets around the same time he took the letter from his home, but its unknown if they are related. Police are investigating the letter.

Previous Post: « Extreme Fitness Can Be Bad for Your Health (and Completely Humiliating): VIDEO
Next Post: Ronan Farrow Talks with TIME Editor About Laverne Cox, the ‘Trans Tipping Point’: VIDEO »