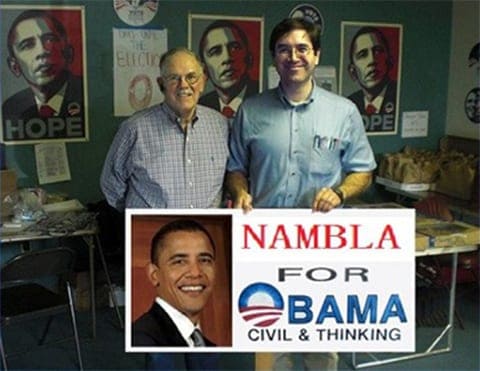 Right wing nut Matt Barber’s website, BarbWire, ran a post earlier today showing a photo (pictured above) that seemingly shows a pair of Obama supporters showing an affiliation with NAMBLA, the North American Man /Boy Love Association, a group that supports pedophilia and lobbies to reduce age of consent laws. The BarbWire article was meant to expose the "dangerous link between homosexuality and pedophilia" so as to "clearly demonstrate the precise reason why we must continue to keep homosexual men as far away as possible from our young boys.”

As both Joe.My.God and Right Wing Watch point out, the photo used was clearly photoshopped with “NAMBLA” superimposed over the sign in the original image that read, “Republicans for Obama.” The author of the post, pastor Jeff Allen, has since claimed that using the photoshopped picture was an “innocent mistake” and accused Right Wing Watch of “deception” for having “painted [their] mistake as intentional.”