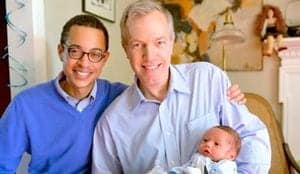 If officially appointed, Osius will replace David Shear, who has held the position since 2011 and been recently nominated to be the next Assistant Secretary of Defense for Asian and Pacific Security Affairs in the Department of Defense.

…A known gay politician, Osius is now married to Clayton Bond, who is an officer with the US Department of State’s Bureau of African Affairs.

From the State Department announcement: