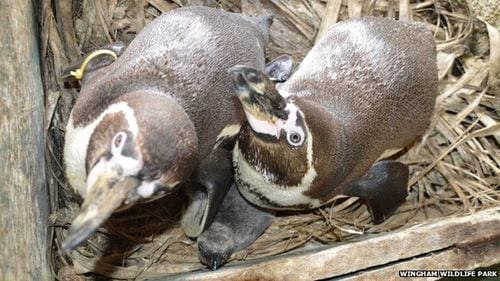 We all know that same-sex penguin pairings have shown themselves to be proud, and successful, parents to little penguin chicks. Zoos around the world, from China to Ireland, Israel to New York City, have reported on the happy duos. Now, a couple of avian papas, Jumbs and Kermit, are raising a youngster abandoned by its mother after the father refused to help incubate the fragile egg. According to zookeepers at Wingham Wildlife Park, the two dads are doing a bang up job.

Park owner Tony Binskin said: "These two have so far proven to be two of the best penguin parents we have had yet."

Jumbs and Kermit were first seen pairing up in 2012, leaving two females without mates.

"Whilst it was nice to see two of our birds pair up, it actually meant that we were left with not two but four birds unable to reproduce within our collection," Mr Binskin said.

In fact, the male-male pair was part of the reason Hurricane, the quick-to-leave father of the new chick, was brought into the zoo, to reproduce with the female penguins. Despite the ensuing difficulties, zookeepers are happy to have the devoted dads amongst their penguin population.

Mr Binskin said: "Whilst pair bonding often results in no result other than eliminating those two animals from the breeding population of that species, in captivity it can have greatly positive effects.

"We are still very much starting our breeding efforts with this species, and this is only our second year of breeding, but having such good surrogate parents available should we need them is a huge bonus for us."

Cheers to Jumbs and Kermit!