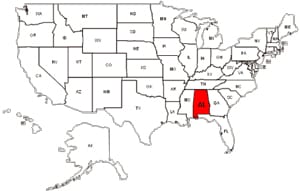 The appeal was brought by a Dallas County, Alabama, man who was charged with engaging in consensual sodomy with another man and ultimately sentenced to 12 months in jail for "sexual misconduct." The Alabama statute prohibiting such conduct states that "consent is no defense" to a prosecution under this law and the appeals court revealed that the commentary to the statute shows that the law was specifically enacted "to make all homosexual conduct criminal."

Though such laws are moot considering that the U.S. Supreme Court declared all sodomy laws unconstituional in the 2003 case of Lawrence v. Texas, eleven states still have such laws on their books including Florida, Idaho, Kansas, Louisiana, Michigan, Mississippi, North Carolina, Oklahoma, South Carolina, Texas and Utah.

In fact, just two months ago Louisiana voted to keep their unconstitutional law on the books, and even arrested men the year before under its unconstitutional provisions. Russian President Vladimir Putin has pointed to the existence of such laws in the U.S. to deflect criticism of his country's odious anti-gay laws.