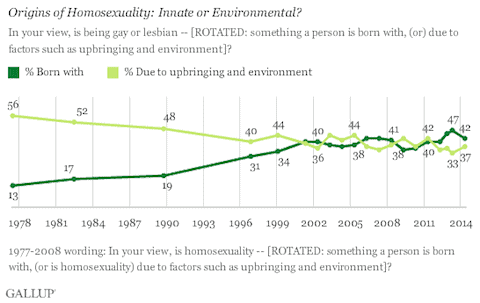 Nature versus nurture: the debate continues as to whether gay people are just born that way or just really, really like being subjected to systemic persecution and abuse.

The most recent Gallup poll shows that despite the great strides that GLBT people have made towards equality, only 42% of those polled believed that orientation is an inborn trait while 37% still believe that it's a conscious and deliberate choice that is made. Predictably, those with college educations, whites, females, liberals, Democrats, high-income earners, and those who seldom or never attend church tended to be the demographics that believed in nature.

A more thorough breakdown of this new poll coming up later from Lisa Keen.

Previous Post: « Here are the Best News Bloopers of May 2014: VIDEO
Next Post: Antoine Dodson is a Father, Will Try and Get His Son Help if He Turns Out Gay »