Former Rep. Barney Frank has weighed in on one of 2014's tightest congressional races, that of his state Massachusetts' sixth district. It's a headline grabber — incumbent Rep. John Tierney (D-Mass.) versus Republican challenger Richard Tisei. While Rep. Tierney has been a staunch advocate of LGBT rights, Tisei may be poised to snatch votes from him. Rep. Tierney is staight, and Tisei is openly gay. If elected, Tisei would be the first openly gay Republican elected to Congress.

If this story sounds familiar to you, you're not wrong. Two years ago, the same two candidates were squaring off in the same district. That time around, the race wrapped up tight — Tierney's 48% to Tisei's 47.

This year, things could shake out differently. In February, Tisei was endorsed by the Gay and Lesbian Victory Fund, leading to a bump in his polling data.

Wednesday evening, former Rep. Frank assembled a group of LGBT donors on Capitol Hill to discuss the congressional race and voice support for the incumbent Tierney. 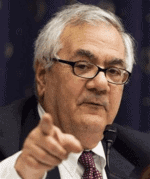 While the donors acknowledge allure in the idea that a gay Republican who could shake up the party, many suggest that this is not realistic — that it's more important to reduce the influence of Republican leader and LGBT rights opponent Rep John Boehner (R-Ohio).

Former Rep. Frank expands on the core reasons to not elect Tisei:

"I do believe it is very important to support gay and lesbian candidates. But the notion that we will tell an incumbent who has been absolutely perfect on gay, lesbian, bisexual [and] transgender issues — absolutely perfect — that perfection will do no good because he has sex with the wrong person, [that] is the antithesis of what we should be fighting for."

Concise and whip-smart as ever, but that's Barney Frank for you.

Frank's sentiment is echoed by the incumbent Rep. Tierney. While he would like to have more pro-gay Republcans in Congress, Tierney points out that electing them in the current political climate would have little effect.

"[Pro-gay Republicans aren't] allowed to even vote on the matter [of LGBT rights]. They don't get an opportunity. So you need to change the majority to have the matter brought up," he said. "We have currently a Congress that is going nowhere, slowly, under John Boehner."