Weekend Movies: The Fault In Our Stars (and A Little Maleficent) - Towleroad Gay News

The support group has your usual movie mix of comic relief characters (the ringleader is a born again buffoon), and tear-jerking extras who have to sell their pain quickly for ambience, before getting out of the way – “Step aside. Plot coming through!”. We quickly focus on two guys Hazel's age: Isaac (Nat Wolff) who is going blind and his best friend Gus (Ansel Elgort) who lost his leg to the disease but is now cancer free. Gus always has a cigarette dangling from his lips which he never lights, his metaphor for acknowledging death’s presence but refusing to give it power or some such teenage profundity. (I lost my notes.)

Though Fault is not a romantic comedy, and the occasional laughs are of the gallows variety, Gus is basically the gender inverted version of the Manic Pixie Dreamgirl: adorable, impossible to believe as an actual human as opposed to a "character", but deliciously ALIVE and therefore able to jolt our unhappy protagonist awake for adventure… #YOLO.  Gus comes on strong. Very very strong, really, considering Ansel's charm offensive. He's so cocky, self-consciously "cool" and quick to make the moves on Hazel that a tossed-off confession later in the movie that he's a virgin rings suspicious when it's not meant to. I would say the actor is completely overdoing it but this overplaying does have a few benefits in the last act when things get dark. It wasn't until the movie ended that I realized he'd played Shailene's reserved brother in Divergent so he's got range at least. (When we return to that franchise with Insurgent next year will it suddenly be burdened with incestuous vibes?)

Once Gus & Hazel are making eyes and texts at each other and trading favorite novels, the plot gets very complicated and even Transatlantic, eventually taking us to Amsterdam and the Anne Frank house. Hazel’s breathing problems make this tourist stop a Herculean effort (no elevators) and at the top of the stairs in that famous room where Anne Frank hid from the Nazis, the teenage lovers make out and (gasp) are applauded for it by the other tourists in what has to be the single biggest eye-rolling movie moment of the year. 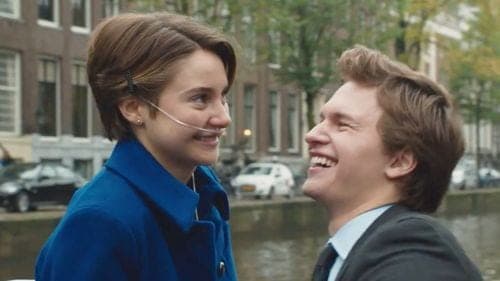 But all the while the threat of sudden death from cancer looms, which is a bummer. But also: the point.

Hazel warns us in voiceover that we have a choice about how to tell sad stories and she’s not going to sugar-coat this one. To some extent she keeps that promise (two funeral related sequences late in the movie and a very frank conversation with her parents are beautifully judged) but the film has enough of the romanticism and broad only-in-a-movie moments (like the Anne Frank house) to hedge its bets. It thinks it's too cool to be maudlin but it's also a little bit maudlin.

Judging the quality of a cancer movie on whether or not it makes you cry and how much ("Four hankies!" – The Blurb Whore Times) is silly. It's a bit like asking if baby kittens are cute and if so which one is cutest? You will have a good cry, the movie delivers there, and sometimes that’s a good reason to go to the movies. If you've lost anyone to cancer when you were both young (full disclosure: I did), fair warning: you will have to towel off from the sheer deluge. But no amount of feels should excuse impromptu makeouts in the Anne Frank house.

Speaking of death and disappointment… 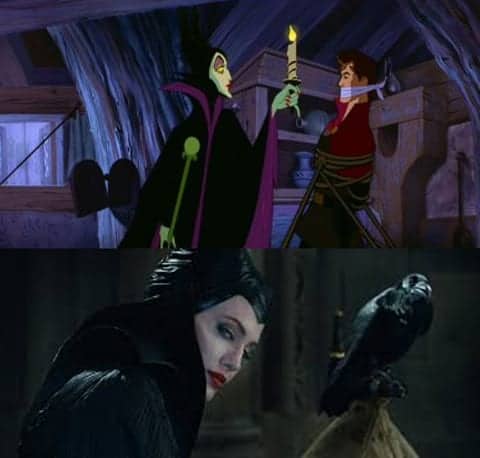 I’m sorry I was absent last week when everyone was gagging on MALEFICENT. I was interviewed about it but otherwise couldn’t collect my thoughts, fighting as they were between love of Maleficent the character and love of Angelina Jolie the star. Both are magnificent goddesses but “Maleficent: The Movie” wasn’t really after their marriage but intent on redeeming Maleficent the character. From what? Being AWESOME ?!? I preferred Maleficent when she was calling upon “all the powers of hell” and taunting Prince Charming with some light bondage.

Somehow the movie made me hate that little “beastie” Aurora (Elle Fanning) for softening Maleficent’s black and purple heart. Quoth the Wicked Witch of the West (who would have given this movie two green thumbs down, way down)

Who would have thought a good little girl like you could destroy my beautiful wickedness?

Previous Post: « Federal Judge Strikes Down Wisconsin’s Ban on Gay Marriage
Next Post: Profiling The Many Failures Of GOProud »