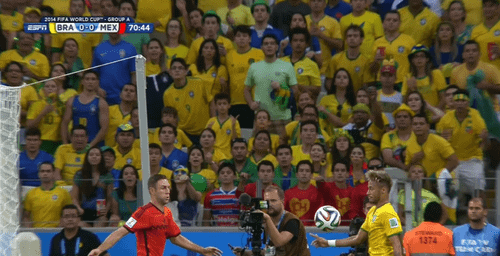 FIFA, the governing body in charge of the World Cup, has started disciplinary proceedings against Mexico and Brazil after fans were reportedly heard on TV broadcasts chanting ¡Puto!" at opposing players during Tuesday’s match up.

“Puto” translates to “fag,” “man-whore,” or “coward” and is often used as a derogatory term for a gay male.

Piara Powar, executive director of Fare and a member of Fifa’s anti-racism task force, told The Telegraph: “It seems that some fans of some countries will take their hatred halfway around the world. These images need to be acted on urgently.

“The levels of homophobic abuse at some matches is also totally unacceptable. There is some rapid education required before it begins to run out of control.

“Fifa has some strong regulations in place and we hope they use them. Zero tolerance is the approach set out. It is what is required here.”

Under FIFA's disciplinary code, Brazil and Mexico could escape with a warning for what would be classed as a first offence but could also be punished by having to play a game behind closed doors. Subsequent or more serious offenses can result in a deduction of points or expulsion from a competition.

CONAPRED, the Mexican federal body charged with tackling discrimination, roundly condemned the use of "puto" at soccer matches, saying correctly: "Seeking to eliminate this practice is not trying to stifle free expression, but avoid the normalization of sexism, machismo and homophobia, understanding that the full exercise of all freedom has to be done in respect to the rights of third parties, without discrimination."