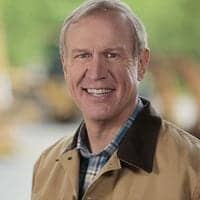 Rauner has struggled with the issue, telling voters last year that he would follow the results of an advisory referendum to settle the gay marriage question if one were held. Later, after lawmakers approved same-sex marriage bill, Rauner said he would veto the bill if he were governor.

On Monday, Rauner tried to steer away from the hot-button social issue, telling reporters once again that he had no “social issues agenda” but declining to express his personal beliefs on same-sex marriage. “I have many gay friends and if they choose to marry I hope they have great lives together,” said Rauner after a speech to the Naperville Area Chamber of Commerce.

But he did say he was open to a repeal: "Now it's passed, it's the law, I don't have any agenda to change it and the only way I'd change it is if it were done in a referendum — the voters said that they'd want to change it."

LGBT groups are pushing back, the HuffPost reports:

"Rauner, the Republican candidate for governor, claims to be a social moderate," the letter read. "We know the real Bruce Rauner. His administration would very likely be working behind-the-scenes to block new legislation and erode the existing laws protecting our families."