Key figures from NOM have been plotting their next move in secret in Princeton, NJ, calling themselves The Princeton Group. 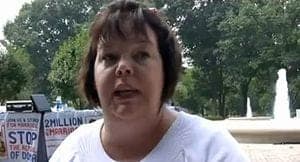 On Friday, June 13, I celebrated my fifth wedding anniversay with the man to whom I have been partnered for eleven years. A few days later, my husband and I celebrated our first Father's (or Fathers') Day. It was a great weekend to honor our strong bond, loving family, and overall peace.

Little did we know that just about fifty miles away from our NYC home, over in Princeton, NJ, Maggie Gallagher (NOM cofounder and past president), Robert George (NOM cofounder and chairman emeritus), Brian Brown (current NOM president), John Eastman (NOM's current board chair), and a number of other individuals who were responsible for creating NOM back then (like founding board members Luis Tellez and Chuck Stetson, for instance) and are responsible for maintaining NOM now (like Sean Fieler, a key funder, and Diego Von Stauffenberg, NOM's current development director) were holding a secret, invite-only meeting focused on "developing and deploying an action plan to protect marriage and preserve religious liberties." It certainly seems like some sort of secret, shadowy version of NOM (Super NOM?) is going on behind the scenes.

Previous Post: « Rob Portman Says His Support for Gay Marriage Will Make a National Run for Office Difficult: VIDEO
Next Post: Here’s What It’s Like When a Massive Bear Comes to Hang Out With You: VIDEO »