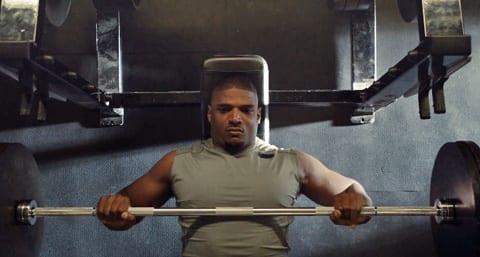 USA Today takes a look at how Michael Sam has been holding up in NFL preseason training and how he is fitting in with his fellow teammates on the St. Louis Rams.

"He's learning his role here. We've got such a deep D-line, he's going to fight for his position," [defensive end Robert] Quinn said. "He gives it 110% while he's out here. He wants to learn his playbook, wants to help his team win.

"He's a football player here. That's all that really matters." […]

The Rams also brought Wade Davis, a former NFL player and executive director of the You Can Play Project advocacy group for gay and lesbian athletes, in shortly after the draft to talk with Rams players about having a gay teammate.

Sam said he appreciated the gesture, though he didn't think it was necessary.

"They respect me as a human being and as a football player," he said of his St. Louis teammates.

Sam said with all the past attention and media spotlight, it’s a welcome change to be seen as just another rookie vying for one of the 53 spots on the final roster at the end of preseason.

He added: "I thought our defensive line at Mizzou was pretty tough. This is a whole new level. I've got to up my game."