Chris Mason Johnson’s first feature The New Twenty was about a group of friends hitting 30 and though it had a couple of gay characters it was a decidedly more mainstream effort. Test is a huge leap forward artistically and the director’s voice is clear. Why is that? “Part of it is practice,” he admits, adding humorously “That’s the boring answer!” He directed, wrote, edited and produced this new film after a more commercial project fell through. “The more interesting answer is I had a much stronger sense of what I wanted to say and what I wanted to do. And it was much more personal.“

Johnson began his career as a dancer and paired with his talent behind the camera this grants Test a rare authenticity, especially for a micro-budgeted indie with “light suggestions of period". Johnson jokes that they just had to kind of point the camera up for lack of 1985. Joking aside, he knows just where to put the camera and I thank him profusely for letting us actually see the dancing rather than editing the movement into abstraction. He shares a list of inspiring films that got dancing right “Cabaret - Bob Fosse was an amazing director of dance, Pina did a genius job, The Red Shoes of course, Hair, Saturday Night Fever, Pennies From Heaven the Christopher Walken number is incredible.” 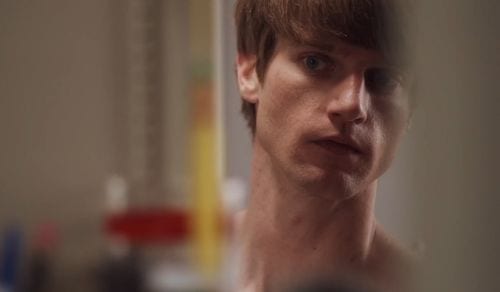 Of course this all works in no small part because he hired actual dancers. I tell him I imagine it was tremendously difficult to cast.

“Yeah, it really was,” he admits. “The analogy I use is that a lot of people can carry a tune but they can’t do opera. This is sort of the opera equivalent of dance. Natalie Portman [in Black Swan] had a body double and we didn’t want to do that — The whole fun is seeing a real person do it. I met with different dancers and read them on camera – tricked them into auditioning to see if they were natural.” He settled on Scott Marlowe, a handsome dancer who gives an unforced engaging performance nailing Frankie’s nervousness and conflicting emotions around the test itself. But he's truly electric when he's dancing. “We workshopped for about six months. He thought it was free acting lessons, I thought it was free rehearsals so it was kind of a win-win.” The second lead Matthew Risch is a Broadway actor and dancer.

We reach the topic of sex scenes and I wonder if that’s easier with dancers who are used to performing shirtless and are, by profession, attuned to their bodies and physicality. “It’s always difficult to film sex scenes,” he says, discarding my theory. And then, rather unexpectedly, he recounts the shit he got from some members of the gay community when The New Twenty came out and the straight sex scenes were "robust" and the gay scenes weren't, which he thought was right for the plot and those characters. With Test “I wanted to prove I wasn’t squeamish about that.”  He’s very happy about the chemistry between his leads. They filmed the sex scene on Matthew's last day of the shoot. “It felt really real. If you have a four week shoot, you can’t redo and redo.”

One of the most striking story beats is Frankie's struggle to 'dance like a man.' It opens up dialogue about the enduring topic of performative “masculinity” that is so prevalent in gay culture. Was that always in the screenplay? 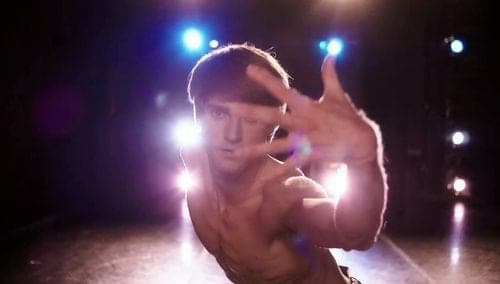 “Absolutely! It was one of the central motifs from the beginning." Johnson was drawing from personal experience. "As a dancer a choreographer actually did shout at me 'Dance like a man!'. I talked to very young gay dancers in ballet companies and they're still going through that. It's an aspect of the dance world a lot of people don't know about. They assume that because there's a lot of gay men in it that it's gay friendly and therefore there aren't any issues. That's not true. Mainstream dance depends on male / female tension like Hollywood. It's understandable. You're telling a story of erotic tension and we have to believe that. The problem comes when directors can't separate out sexual identity from the performance of gender of the body. Instead of saying ‘When you move your arm like this, it's a little soft and we need a harder feeling here,’ they say ‘You're too gay. Don't be gay!'."

And this ties neatly back into Test itself, which takes place when that message was pervasive and gays were scapegoated. "Frankie's getting the message from all sides 'What you are is worthless and you deserve to die from AIDS. And you're not even a man as a dancer.'"  We both agree that things are immeasurably better now however far we still have to go.

As for where this director is going, I'm happy to report that he wants to do more dance in film. But with the success of Test under his belt he’s also looking into developing for TV. Even better, because we need these cinematic voices, he says "I definitely want to stick with queer representation."

TEST is currently showing theatrically in New York but it’s also available nationwide to rent or buy On Demand and at iTunes. This is a Test you should take.

Previous Post: « Willam and Amanda Lepore Face Off in Tel Aviv: VIDEO
Next Post: Check Out This Heartwarming Video In Celebration of Gay Dads: WATCH »