Two new marriage lawsuits were filed this week, in Michigan and North Dakota, making a total of 74 cases in 32 states around the country. 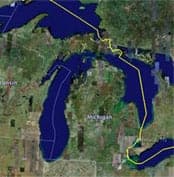 The attorney for Bruce Morgan and Brian Merucci filed the suit Wednesday in Federal court.

The couple had been married in New York and since their marriage is recognized on the federal level, they contend it should be recognized in Michigan as well.

Morgan and Merucci have been a committed relationship for seven years. In 2011, Morgan was diagnosed with inoperable brain cancer. He released a statement through his attorney Stephanie Myott from the law firm Rhoades McKee: "If I am in the hospital, I want to know that Brian can be there at my bedside as my spouse and that the hospital will recognize the decisions he makes regarding my care."

Here's the full press release on the Michigan case.

And North Dakota got its second lawsuit, from Lambda Legal:

The 33-page complaint filed by Janet Jorgensen and Cynthia Phillips, who were legally married in Minnesota, says the couple is treated as "legal strangers" in their home state. It says North Dakota's law violates the equal protection and due process clause in the 14th Amendment to the U.S. Constitution.