A bill introduced to the Senate on Thursday by Massachusetts senator Ed Markey (D, right) aims to create an LGBT envoy to promote equal rights abroad. The bill is backed by over twenty other democrats, and although it faces a difficult approval process, it is an exciting step toward LGBT-related diplomacy, particularly given the recent upswing in anti-gay violence in countries ranging from France to Uganda. The official title of the bill is "The International Human Rights Defense Act." 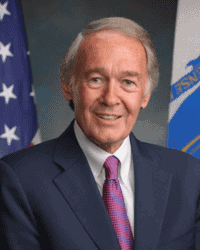 “For the United States to hold true to our commitment to defending the human rights of all people around the world, we must stand with the LGBT community in their struggle for recognition and equality everywhere,” Markey said in a statement to BuzzFeed. “By fostering a coordinated effort across the federal government and relevant agencies, we can meet the enormous challenge before us and work to ensure equality for all people around the globe.”

In addition to creating the envoy’s office, the bill would direct the State Department to “devise a global strategy” to prevent discrimination and violence against LGBT people and coordinate with LGBT-rights advocates in other countries and in international organizations.

If the bill were to pass, it would be a firm indication of a shift in American diplomacy, away from the George W. Bush era, when the U.S. blocked prioritization of LGBT rights in the UN. Though President Obama does not have the best track record with the LGBT community, including a continued refusal to sign the Employment Non-Discrimination Act, he could have the chance to create the envoy post without a congressional vote.

Currently, twelve human rights organizations are endorsing the bill, including the American Jewish World Service and the Council for Global Equality.

We will keep Towleroad readers posted as the bill is discussed in Senate.