R. Kelly's youngest child, 13 and named Jaya at birth but now goes by Jay, has come out as transgender, InTouch reports: 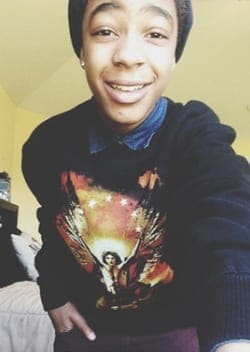 As of three months ago, Jay said his father was unaware of his new identity, but added his mother—Drea, who stars on the reality series Hollywood Exes—has been extremely supportive.

“[My mom] was like, ‘Baby, you know I love you if you were bi, gay, [lesbian], you name it and I would still love you so much,’” he wrote on his Ask.fm page, which is a social platform that allows users to answer anonymously submitted questions.

“She was very proud of me, I was like, ‘Thank you mum for accepting the fact that I’m a transgender.’

“And same with my sister, she told me that she was proud of me, and respects me by calling me handsome and calling me her little brother now, and I love her for that, so you know it was great for me.”

Jay says he is looking forward to being truly comfortable at some point in the future after gender reassignment surgery and testosterone treatments.