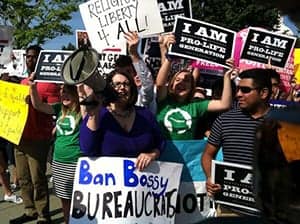 The U.S. Supreme Court today ruled today that businesses can object on religious grounds to providing contraceptive coverage to its employees as mandated by the Affordable Care Act, The Chicago Tribune reports. The decision came down to a 5-4 vote, with the justices dividing along ideological lines:

In a majority opinion by conservative Justice Samuel Alito, the court said the ruling applies only to the birth control mandate and does not mean companies would necessarily succeed if they made similar claims to other insurance requirements, such as vaccinations and drug transfusions.

In the majority opinion, Alito indicated that employees could still be able to obtain the birth control coverage via an accommodation to the mandate that the Obama administration has already introduced for religious-affiliated nonprofits. The accommodation allows health insurance companies to provide the coverage without the employer being involved in the process.

Under the accommodation, eligible non-profits must provide a "self certification", described by one lower court judge as a "permission slip" authorizing insurance companies to provide the coverage. The accommodation is itself the subject of a separate legal challenge.

As Towleroad contributor Lisa Keen previously pointed out, The Hobby Lobby case is of particular concern from an LGBT perspective because some have believed that a ruling in favor of Hobby Lobby could later be used by employers seeking exemptions on religious grounds from providing health benefits to LGBT employees “such as coverage for the same-sex spouses or partners of employees, reproductive services for lesbian couples, testing and treatment for men at risk of HIV infection, [and] transgender treatment for people with gender dysphoria.”

You can find previous coverage from Ari on Hobby Lobby and why this ruling matters HERE and HERE.