The infected vampires, or “H-vamps,” have descended on the community mixer and they are tearing things up. Well, things and people. The pack of feral vamps are attacking the crowd, kidnapping Nicole (Jurnee Smollett-Bell), Arlene (Carrie Preston), Holly (Lauren Bowles), Deputy Kevin (John Rezig) and even the town drunk, Jane (Patricia Bethune). Others end up worse than that. Take Tara (Rutina Wesley), for example.

She may be one of the most poorly-handled characters on a show full of poorly-handled characters (remember when she was suddenly a lesbian cage fighter?), but she has been an important part of True Blood since the first episode. Now? We don’t even get to see her get the true death. Instead, she leaps to her mother’s defense against an attacking vamp, and once the siege is over, all we see is Lettie Mae (Adina Porter) sobbing in a pile of Tara parts. 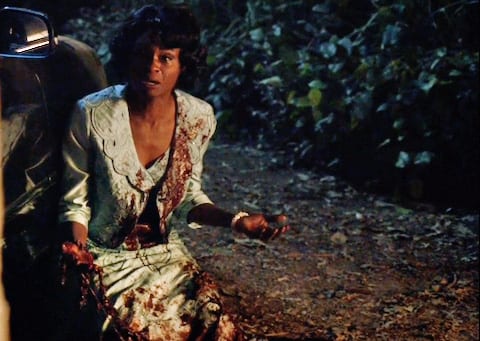 Sam (Sam Trammell) and Alcide (Joe Manganiello) try to sniff out where the H-vamps took their victims, but lose the scent. When they return to the scene at Bellefleur’s, Sam’s spotted shifting from dog back to human. Of course the one to make the ID is Vince (Brett Rickaby), the man he beat in the mayoral election. He’s also not super keen on all the supernatual beings running wild through the town. Sam manages to convince him to keep a lid on the whole “the mayor turns into a dog” thing to prevent panic, but Vince doesn't seem wholly convinced the mayor has everyone's best interest at heart here.

Sam disperses the crowd, each human paired with their vampire. Alcide gets ready to depart, but can’t find Sookie (Anna Paquin). Oh where, oh where could she have gone? She’s just taking a relaxing evening stroll through the woods alone and throwing her cell phone away. Super smart move. Sookie's having an attack of the feels because she hears everyone being so mad at her for somehow causing all this. It’s a pretty big leap to blame Sookie’s relationship with Bill (Stephen Moyer) for the outbreak of Hep-V that’s creating this whole situation and not, I don’t know, the already tenuous vampire-human relationships that have been playing out all around the world since the show’s first episode. BUT SURE. All Sookie's fault. She's just skipping through the woods, tra-la-la, until, JINKIES, it’s a body!

Even though there are herds of out-of-control vampires and Sookie has delicious, delicious faerie blood, she makes it home safely. Alcide isn’t exactly thrilled that she was traipsing around at night alone. She explains that she's just upset because she heard everyone think that it was her fault this was all happening — even Alcide. She can’t handle all of the blame, and he can’t handle her reading his thoughts. The lovers’ quarrel ends rather abruptly when Alcide heads up to bed. She joins him eventually — naked — and apparently they've agreed to disagree? It's hard to stay mad when you've got an Alcide waiting up in your bed, I suppose. Later, when confronted by a church full of people thinking she’s the scourge of Bon Temps, Sookie gives everyone an impassioned speech about loving this town and these people and how she, the person who knows the most about vampires (more than the vampires?), is in the best position to help them. We’ll see how that works out.

Sam sent Jessica’s manfriend, James (Nathan Parsons), home with Lafayette (Nelsan Ellis) for protection. When they arrive at Lafayette’s place, James tells the story of him and his … friend … Danny. (There is a lot of awkward pausing when describing this relationship, which makes me wonder if Danny dabbles in doing dudes.) James was a draft dodger back before he was turned. Danny was shipped off and never came home. When James went over to give his condolences, Danny’s father beat him with a baseball bat. Lafayette, whose cousin was just killed (again), is clearly affected by his story. There’s certainly a spark between them, but how will Jessica (Deborah Ann Woll) feel about all this? 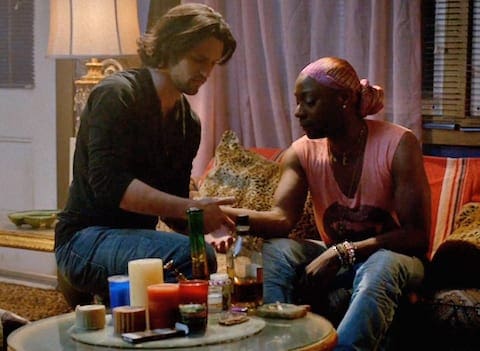 Speaking of Jessica, she’s still posted outside Andy Bellefleur’s (Chris Bauer) house when they hear about the attack. Andy rushes out to go find Holly, while Jessica vows to stay behind and protect Adilyn (Bailey Noble). The two girls are bonding — while Jessica is safely stuck outside the house — just talking about boys, until an H-vamp shows up hungry for Adilyn’s sweet, sweet faerie blood. Jessica initiates a stare down, but when the sun starts to rise, it appears that both she and the infected vampire are going to burn up. Adilyn panics and invites Jessica in, inciting everyone’s favorite ginger vampire to quickly swoosh inside, scoop up Addy and almost –almost! — sink her teeth into the last remaining Bellefleur faerie daughter. Instead, Adilyn sends her up to the attic to sleep away the day while the infected vampire burns alive on the porch. 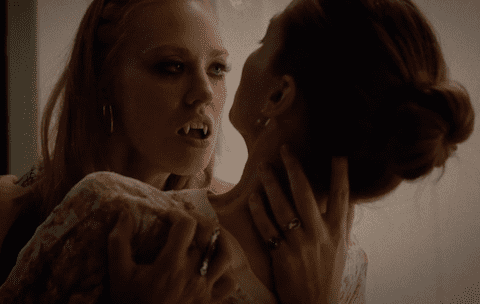 After the raid on Bellefleur’s Bar and Grill, Willa (Amelia Rose Blaire) offers Lettie Mae a taste of blood to cope with her injuries. Of course, Lettie’s V-induced visions include Tara trapped in limbo. So, if I were a betting man, I’d wager we haven’t seen the last of dearly departed Tara. Lettie Mae’s husband, Rev. Daniels (Gregg Daniel), offers to let Willa stay with the family, so expect lots more V-trips (and Tara sightings) for dear old Lettie.

While the human-vampire pairings settle in for the night, there’s still a hunt on to find Arlene and the other kidnapped folks. Jason (Ryan Kwanten) and Violet (Karolina Wydra) come across a vigilante mob led by Sam’s rival, Vince. Stackhouse warns them to stay out of this, while Violet has some more … colorful … things to say. The experience is the last straw for Jason, who has been denied sex for too long and now is getting emasculated at work. He demands sex from Violet, who was just waiting for him to take the initiative, and then they do it on the hood of a car. 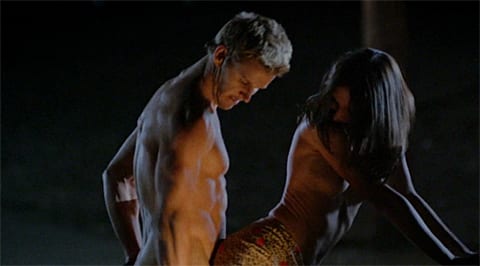 The other search party consisting of Andy and Bill come across an abandoned slaughterhouse where the H-vamps had been nesting. The vamps apparently moved on, but they did find that vigilante mob, who are having a really busy evening, I guess. When they attempt to gun down Bill, Andy pulls a little trick to save them. He’s quick to remind Bill that this doesn’t mean they’re friends. After all, Bill’s the reason Adilyn’s sisters are dead. However, Andy needs Bill's help to find Holly.

Unfortunately for everyone, the infected vampires are not even in Bon Temps anymore. They’re over in Shreveport, shacked up at Fangtasia. The prisoners are chained in the basement, waiting to be brought upstairs one by one and devoured by the pack of feral vamps. Things don’t look good for the prisoners, but it’s particularly bad news for Deputy Kevin. He doesn’t even make it upstairs when he is eaten by the vampire sent down to fetch them. R.I.P. Deputy Kevin, I already miss you more than Tara.

Meanwhile, in North Africa, everyone’s favorite, Pam (Kristin Bauer van Straten), is on a quest to find Eric (Alexander Skarsgård). We encounter her first playing some sort of weird vampire Russian roulette game against a devout follower of Islam. She wins, but not before dropping the excellent Pam-ism: “Your god and my god can go to a motel and have a circle-jerk, for all I care. I’ll be in hell having a threeway with the devil.” Winning earns her the name of someone who knows where Eric is. Finding him gets her a really simple map that says “Rhone” on it. Pack your passport and croissant, Pam, you’re going to France.