A brief has been filed by over two dozen prominent Republicans in Michigan's 6th Circuit Court of Appeals case regarding the state's same-sex marriage ban. This is an exciting development in the state whose voters originally approved the ban by a 59% majority. 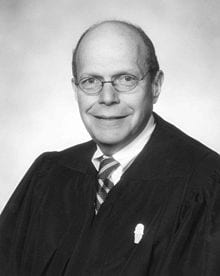 After judge Bernard Friedman (right) overturned the ban this March, declaring it unconstitutional, Michigan attorney general Bill Schuette appealed that decision and asked for a stay; 299 couples married in the one day between, but as briefs pile up in support of same-sex marriage, the case for marriage equality is stronger by the day (especially considering precedent from the Supreme Court and other regional cases around the country). The Republican brief is a particularly resonant example of changing public opinion.

“As various states have legalized civil marriage for same-sex couples, undersigned Amici, like many Americans, have examined the emerging evidence and have concluded that there is no legitimate, fact-based reason for denying same-sex couples the same recognition in law that is available to opposite-sex couples,” they said in the brief.

The brief was signed by 15 former members of either the state or U.S. House of Representatives, including former Speaker of the House Rick Johnson of LeRoy, U.S. Rep. Joe Schwarz of Battle Creek, and state Rep. Chris Ward of Howell. 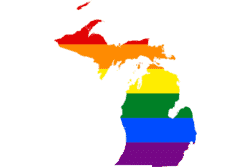 Other signers included attorneys and staffers whose opinions regarding marriage equality have changed in recent years. One former representative, Leon Drolet, argued that the brief could feasibly encourage other Republicans to "come out of the closet" about same-sex marriage, while former Michigan house speaker Rick Johnson said he believes the change in opinion is important for the continuation of the party.

“You make decisions, especially when you’re the leader, based on what’s going on at the time, and that was the movement at the time,” he said. “But now, if you’re going to be Republican and make the comments that we want a broad tent, then you should include everyone. A lot of people are tired of government in their house, in the backyard or in their bedroom.”

Many Michigan Republicans have retained their anti-same-sex marriage stance, but the thirty-one briefs filed in opposition to the ban on Monday indicate that such attitudes are ultimately falling by the way side. Drolet commented:

“Hopefully we’re moving to a place where treating people differently based on gender or sexual orientation will be an embarrassing part of our past.”