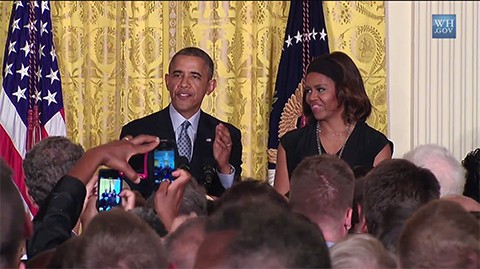 Utah Republican Senator Orrin Hatch, American faith leaders and 140 religious leaders have asked Obama for “a robust religious exemption” stating “it would be wrong to require [religiously affiliated federal contractors] to violate those legally protected convictions in order to be eligible to receive federal contracts.”

“Religious freedom is one of our most cherished values, a fundamental and defining feature of our national character. It guarantees us the freedom to hold any belief we choose and the right to act on our religious beliefs within certain limits. It does not, however, provide organizations the right to discriminate using taxpayer dollars. When a religiously affiliated organization makes the decision to request a taxpayer-funded contract with the federal government, it must play by the same rules as every other federal contractor

Indeed, taxpayer-funded discrimination, in any guise, is antithetical to basic American values. Polls consistently show that Americans overwhelmingly understand and agree that when tax dollars are in play, discrimination is wrong. If an organization requests and receives government funding, it should not be allowed to discriminate against qualified job applicants based on who they are or what their religious beliefs may be. Yet, exempting religiously affiliated organizations that contract with the federal government from prohibitions on discrimination by federal contractors would do just that.”

Chris Geidner from Buzzfeed Politics adds that the letter also asks Obama “to reverse a Bush order that expanded the religious exemption under the existing federal contractor order… [which] permits religiously affiliated organizations that receive government contracts to discriminate in hiring based on religion.

Such religious exemptions are what compelled the National Gay and Lesbian Task forced to drop its support for the current Employment Non-Discrimination Act (ENDA).

Read the full letter AFTER THE JUMP…