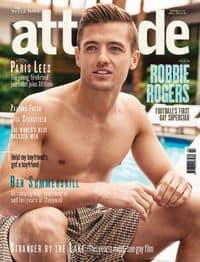 The series, part of producing team Craig Zadan and Neil Meron’s deal at Universal TV, will center on Rogers’ experiences as the first openly gay man to compete in a top U.S. professional sports league. Rogers came out in February 2013 before joining the LA Galaxy team later that year.

Zadan and Meron, the openly gay duo behind the film versions of Chicago and Hairspray, will serve as executive producers for the upcoming series. Rogers will also serve as a producer.