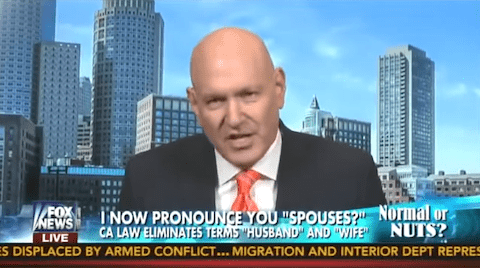 Isn't this the very thing that led to Rick Santorum's "Google problem"?

Fox News talking head and quack psychiatrist Keith Ablow weighs in on California Governor Jerry Brown's decision to replace the terms "husband" and "wife" with "spouse" in the state's marriage laws, with the predictable level of absurd misinformation that even other Fox hosts have called him out for:

Here's the thing, the states need to get out of the marriage business. There's no way that the state of California can deny a marriage license to four spouses now. Eight spouses, or I would say three human spouses and the canine they absolutely love because if love is the foundation of marriage, they can love their dog, too.