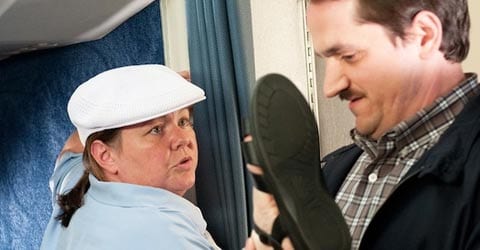 Tammy was co-written and directed by Ben Falcone, Melissa McCarthy’s real life husband. He plays the boss who fires her here and also co-starred with her in Bridesmaids as the Air Marshall she seduces with her surprising flexibility. But McCarthy’s comedy isn’t as nimble this time. She’s repeating herself now and needs stronger material or comedy savvy scene partners who won’t just hand her every scene (think: Kristen Wiig and Sandra Bullock). She can still pull a laugh from thin air without any jokes around (part of the problem because it doesn’t encourage actual jokes to be written). But why does the movie borrow plot elements and a late film character arc from Identity Thief? That’s a terrible movie; If you’re going to steal from yourself, go for the good stuff!

Tammy is a better film than that, but it’s not particular funny either so it's more depressing as a missed opportunity. There’s too much real pain (alcoholism, failed marriages, childhood trauma, et cetera) shoved between the infrequent laughs. Within the first 15 minutes Tammy has lost her job, her marriage and her car (her dignity gone before the opening credits). Soon she’s on the road with her randy grandmother (Susan Sarandon) despite her mother’s (Allison Janney) protests. But her grandmother has just as many unfunny problems. The casting of the three generations is bizarre – were they pregnant in grade school? Sarandon is such a well preserved beauty that a gray wig and prosthetic cankles ain’t going to cut it. 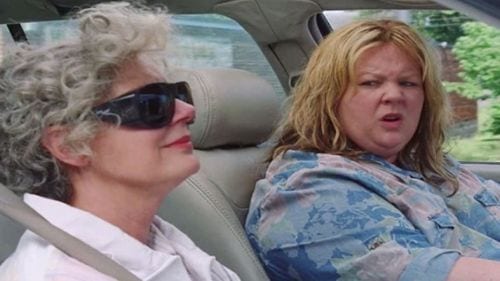 When the fast food robbery scene finally arrives it’s sandwiched between a health scare and a lesbian Fourth of July party that is curiously played totally straight (no pun intended) – no jokes in sight! – and with a mean-spirited drunken climax. The robbery is still funny but the context isn't. Tammy is as terrible as Tammy herself at applying itself and sticking with a plan. It's everything at once halfheartedly: slapstick comedy, sweet romance, family drama, character study, and women on the lam fun.

The surest measure of a comedy is how many good jokes are left out of the trailers. Not to get all corporate about it but in pre-production it couldn’t hurt to earmark the scenes you plan to use in trailers and then whip out a handy flow chart. The first box before anybody picks up a camera says “Can you fit all your best jokes into the trailer?” If your answer is “Yes” it loops you back around to the start: “Write a funny movie.”

If all of your best gags can fit into 2-5 minutes of pre-release promotional material, what are you going to do with the other 90? Asking for a joke a minute is a pretty low bar for a talent like Melissa McCarthy to clear. It’s certainly lower than that fast food counter and Tammy manages that on her third attempt. If only she wanted laughs as much as she wanted those pies. 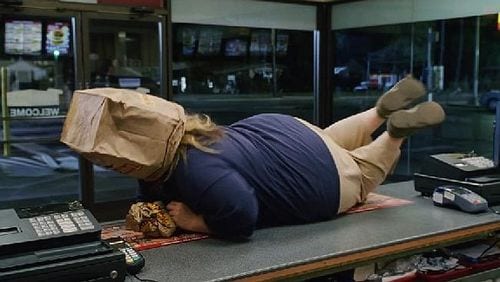