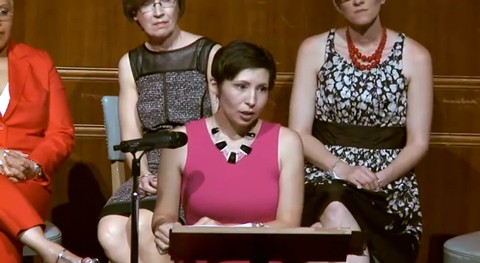 Debi Jackson — a self-described “conservative southern Baptist” mom from Alabama who wanted a boy — recently spoke in passionate defense of her six-year-old transgender daughter A.J. who began transitioning into a female appearance at age four.

“Kids have no idea what they want or who they are. My kid wants to be a dog! Should I let him?”…

“There’s a profound difference between wanting to be something in imaginary play and in declaring who you are insistently, consistently, and persistently — those are the 3 markers that set transgender children apart, and my daughter displayed all of them.”

“Kids shouldn’t have to learn about sex at such a young age.”

Well, I agree, so it’s a good thing that being transgender has nothing to do. Gender identity is strictly about how a person views him or herself on the inside and it is completely separate from who we are attracted to.”

“God hates transgender people. They are sinners and going to hell.”

My God taught us to love one another. Jesus sought out those who others rejected. Some people choose to embrace biblical verses that appear to say that transgender people are being wrong. I choose to focus on verses like I Samuel 16:7 which says “But the Lord said to Samuel, ‘Do not consider his appearance or his height for I have rejected him.’” The Lord does not look at the things that people look at. People look at the outward appearance, but the Lord looks at the heart. My daughter is a girl at her heart. She knows it.

According to PFLAG’s blog A Note To My Kid — a place where “ parents, families friends, and allies of the LGBTQ community the opportunity to share their unconditional love, via notes, photos, and videos” — Jackson has also “started a website for parents of transgender and gender nonconforming children: trans-parenting.com.

Watch her speech AFTER THE JUMP…