On July 21st, a court in St. Petersburg, Russia designated LGBT rights group Coming Out as a “foreign agent.” 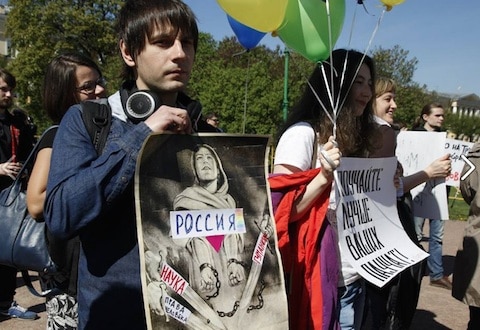 Organizations registered as "foreign agents" in Russia are subject to extra governmental audits and other measures that limit their efficacy.

Coming Out has been fighting the designation for 16 months.

Following the ruling, the group issued a statement on Facebook which reads in part:

"The label 'foreign agent' on all the public materials of the organization would be a sign for wider society that the idea of protecting the rights of LGBT people is something 'foreign', and, therefore unnecessary and even harmful. An organization registered as a 'foreign agent' would also be subject to extra governmental audits, and further measures that would limit its capabilities to work.

"'Coming Out' will appeal the court’s decision, but there is no guarantee that the organization will not be registered by the Ministry of Justice in the nearest future, as it happened also with five major human rights organizations.

"This decision marks an end of the 16-month saga during which 'Coming Out' invested considerable time, effort, and resources to explain to the courts, mass media, and the general public that defending universal human rights of Russian citizens is in the interests of those citizens, and of Russia. We are hoping that, regardless of the final outcome, this message was able to reach the hearts and minds of many people.

According to The Advocate, although Coming Out did not directly mention Russia's ban on "propaganda of nontraditional sexual relations" as the source of the initial complaint, reports suggest that the law has created an untenable situation for LGBT Russians.