A new study by Freedom to Work and the Equal Rights Center demonstrates that better qualified LGBT applicants are 23% less likely than applicants who don’t identify as LGBT to get a call back from some federal contractors, reports Vox.com. 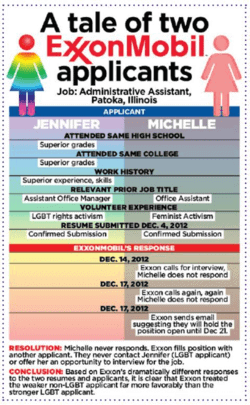 The study, titled Federal Contractors Show Anti-LGBT Hiring Bias, sent two fictitious resumes – one of which mentioned a leadership role in an LGBT organization – to 100 positions across eight federal contractors including ExxonMobil and General Electric.

ExxonMobil has a history of repeatedly rejecting LGBT workplace discrimination policiesand have even been taken to court for anti-gay discrimination.

The LGBT resume always included a higher grade point average and stronger work experience. Despite the stronger credentials, the LGBT applicant was much less likely to get called back.

A report infographic demonstrates one example of the application process through ExxonMobil.

The report concludes that both the ERC and FTW applaud Obama’s executive order which will finally give LGBT employees legal recourse to address work discrimination.

On June 25, 140 religious leaders petitioned for an exemption from the pending executive order.

Watch President Obama's Pride Month address at which he announced the executive order, AFTER THE JUMP…