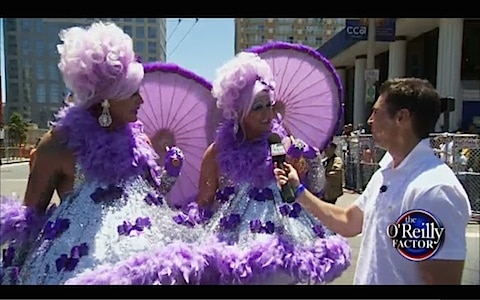 Bill O’Reilly sends his correspondent Jesse Watters to troll the San Francisco Pride parade. Watters tries to get Gavin Newsom to call ‘traditional’ marriage supporters bigots, suggests Mark Leno’s pants are a bit tight, and tries to get a rise out of Nancy Pelosi while showcasing a few of the parade’s more ‘promiscuous’ characters.

But Pride parades have really hit the mainstream, and the most scandalous item that Watters seems to come up with are a pair of drag queens who “love” Bill O’Reilly.