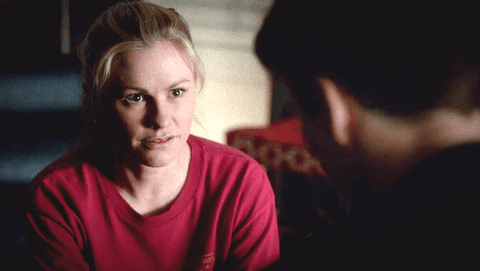 Oh, this show. I've been pleased with how the final season of True Blood has been thinning the herd of the show's ridiculously bloated ensemble. However, after tonight's episode, I'm left a little unclear what the thrust of the remaining will be. Sometimes these things wrap themselves up a little too nicely. We're just four episodes in, and tonight's episode swiftly dealt with two of the primary groups of antagonists this season.

At least we know we can count on Sookie to run roughshod over everyone's lives in Bon Temps. It's probably the only thing we can count on from this show (aside from the gratuitous shirtlessness and sassy Pam one-liners).

Let's hold hands in bed and try to remember everything that happened in tonight's episode, AFTER THE JUMP … 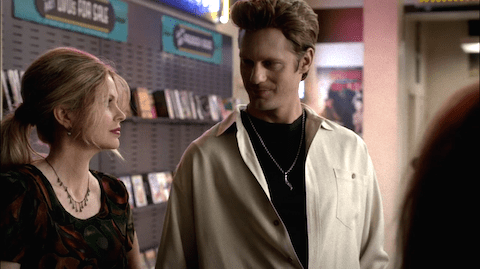 Pam (Kristin Bauer van Straten) and Eric (Alexander Skarsgård) are reminiscing about being totally tubular ‘80s Pam and Eric, back when the Authority whisked them to Shreveport in 1986. Back then, the magistrate named Eric the vampire sheriff and bequeathed unto them a video rental store. Also, there’s an old Underground Railroad tunnel that runs to the basement. You know, just in case that comes in handy 28 or so years from now.

Flash forward slightly to 1996. Pam was working in the video store (listening to Garbage), when in walked Ginger (Tara Buck). She was a brainy student at Tulane, studying vampires in film. When Eric waltzed into the room with his Brandon Walsh hair, she was smitten. Ginger immediate applied for the day shift at the video store.

And the rest was history. Sort of. Flash forward again, now to 2006. Pam was working in the video store (listening to Yeah Yeah Yeahs) when in walked Ginger with some serious Avril Lavigne hair. Ginger was dragging what would become Eric’s Fangtasia throne behind her and she had a great little idea: Turn this video dump into a sexy, vampire nightclub. Pam thinks it’s a great idea. So great, in fact, that she glamoured Ginger and stole the idea, presenting it to Eric as if it was her own.

Back in the present day, the Stackhouses are going around being the bearers of all kinds of bad news. First, Sookie (Anna Paquin) and Jason (Ryan Kwanten) have to tell Alcide’s father (Robert Patrick) and Hoyt (Jim Parrack) about the death of their son and mother, respectively. Next stop is Holly (Lauren Bowles)’s to see if Sookie can magic faerie the H-Vamps location out of Holly’s glamoured brain. Holly is naturally a little tentative about reliving the abuse she suffered at the hands of the infected vampires, but Sookie ain’t got time for that. With a little coaxing, Sookie joins her in bed, holding hands, talking about boys and telling secrets like a middle school sleepover. 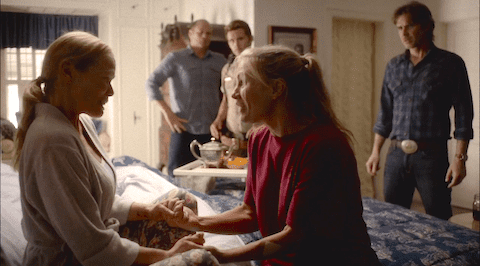 They’re able to figure out the vamps are holding Arlene (Carrie Preston), Nicole (Jurnee Smollett-Bell) and Jane (Patricia Bethune) at Fangtasia via Sookie and Holly’s mind-meld, though the experience reduces Holly to a sobbing mess on the bed. Sookie is basically like, smell ya later suckers, I got what I needed and now you’re on your own. Sookie, out. Psychic-faerie mic drop. Good luck with that PTSD, Holly.

While Sookie was rooting around in Holly’s brain, she also learned that Deputy Kevin (John Rezig) didn’t make it. Sam Merlotte (Sam Trammell) and Jason head over to Kevin’s lady’s house to let her know and spread some of the misery further around Bon Temp. She lets them in to hear the news, even though she’s part of that easily-riled mob and hates Sam for being a shifter. They tell her that they’re going to head to Fangtasia and really teach those vamps for her. No, she corrects them, do it for Kevin.

Next stop, Bill Compton (Stephen Moyer)’s, where the gang is rallying the troops for the assault on Fangtasia. Jessica (Deborah Ann Woll) is in bed with James (Nathan Parsons), and she’s writhing in pain, brought on by that bullet wound in her shoulder. James gets Bill so they can have a mini intervention for her, when Sookie shows up to lay down some more of her signature empathy and understanding. Ha, just kidding. Instead she tells her that she doesn’t give on flying faerie about her problems and she better eat up so that she’s at full strength to battle the H-vamps. Jessica agrees, so James calls Lafayette (Nelsan Ellis) over to serve Jess a little breakfast in bed. At first, she resists, but then Lafayette reminds her that he knows pain as well. He killed the man he loved. They all got their stuff. Having bonded a touch over being murderers, Jess agrees to eat. 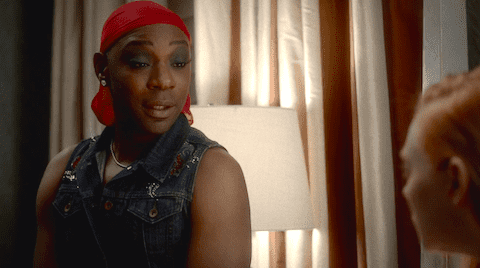 Sookie, Bill, Jason, Violet (Karolina Wydra), Andy (Chris Bauer), Jessica, James and James' two vampire friends are strategizing when there’s a knock on the door. It’s Eric and Pam, and they would like to check up on Willa (Amelia Rose Blaire), please. Of course, they show up just in time to be sucked into these shenanigans, much to Pam’s dismay. Eric summons Willa to join them, and then commands her to go along with the harebrained assault on Fangtasia.

Remember that Underground Railroad tunnel they mentioned very conveniently in the beginning of the episode? Surprise! It comes in all kinds of handy to sneak in and hurry Nicole and Jane out of the Fangtasia dungeon. Unfortunately, the H-vamps already brought Arlene upstairs to feast on her.

Eric and Sookie try another approach. Eric knocks on the front door and tells the vamps he’s sick like them and needs shelter. Plus, he’s got this delicious faerie with him. They open the door and they trojan horse their way in. Meanwhile, downstairs, the rest of the crew is creeping in. Just as they’re about to strike, the easily-riled mob shows up (they found out about the plan from Deputy Kevin’s girlfriend) throwing molotov cocktails into the bar.

Their attack on the attack drives everyone but Sookie and Eric back outside, while Arlene is just barely hanging on to life. Sookie mind-melds and feels her seeing Terry. Outside, the vamps are destroying the easily-riled mob (including their leader, Vince [Brett Rickaby], and Kenya [Tanya Wright]) and our vamps are destroying the H-vamps. Once the fighting is done, one of James’ vampire friends gives Arlene some healing vamp blood, and ghost Terry tells Arlene to stay here and raise her kids. 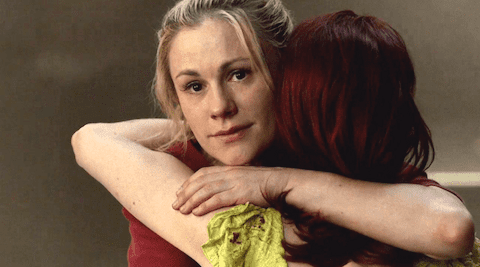 Now that both the trigger-happy mob and the H-vamps appear to be defeated, it feels like this season is about to make a big pivot. Who is the new big bad going to be? Sarah Newlin? The Yakuza?