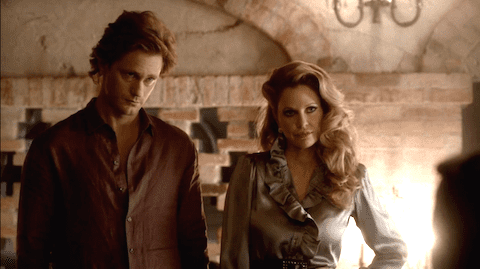 Before we go into tonight’s shocking turns of events, let’s take a quick trip back to the ‘80s, Carrie Diaries-style. Eric (Alexander Skarsgård), still looking fine as hell, is getting his Wang Chung on with a young frenchwoman. They’re getting down in the vineyard when Nan Flanagan (Jessica Tuck) shows up and tells Eric and Pam (Kristin Bauer van Straten) the Authority is working on Tru Blood, paving the way to make mainstreaming a reality. But, it’s going to be hard to stay hidden in the interim if they get caught sticking their baguettes in the vintner’s daughter.

But, Eric will be Eric, and he’s not changing. With a name like the Authority, they don’t really seem like the kind of folks who handle pushback so well. A few sword-wielding assassin types pay a return visit to totally tubular ‘80s Eric and send him a message. Choose who lives: Pam or pretty French girl. Eric chooses Pam, and le petite fille gets a sword through the belly. Adieu!

Back in present-day France, Eric tells Pam he noticed the symptoms of his Hep-V last month. She tries to tell him that they’re working on a cure and he just needs to keep up hope, but he’s having none of it. He’s resigned himself to waiting for the true death. Pam knows something that will give him reason to go on: Sarah Newlin (Anna Camp) is still alive. Once he hears this news, they’re off to find her and make her pay. 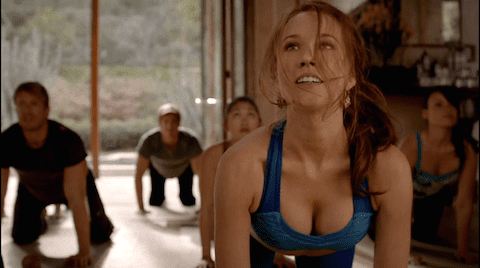 Where, oh where could she be? Turns out, she’s gone brunette and using a fake alias (Ms. “Noomi,” if you’re namaste). Her new spiritual practice also involves downward doggy-style with her yogi. The two finish a tantric tryst, but, once Sarah heads to the wine cellar to grab a bottle, those sword-wielding assassin types are back. She can hear them interrogate her lover while she hides in the wine cellar. When he refuses to give up her location, they kill him.

Meanwhile, Lafayette (Nelsan Ellis) is having himself a little party. He gets a visit from James (Nathan Parsons), who is looking for another high. Too bad all Lafayette has this time is pharmaceuticals and vamps can’t swallow pills. Lafayette offers to do all the swallowing for him (heyyyyy), that way he can enjoy the high as well. James confesses to Lafayette that there is some trouble in paradise between him and Jessica, but when Lafayette asks if maybe James has a thing for him, James demurs (even though recent stories indicate these two are heading to at least a hookup at some point).

Still, they’re having a better time than Lettie Mae (Adina Porter), who still hasn’t come down from the vamp blood she tricked Willa (Amelia Rose Blaire) into supplying her last week. The Reverend Daniels (Gregg Daniel) gets her in bed, but has to break it to Willa that it’s nice and all that she was trying to help Lettie Mae, but the woman is an addict and can’t have a steady supply of V in the house. So, Willa needs to go. He rescinds her invitation into their home and sends her on her way. 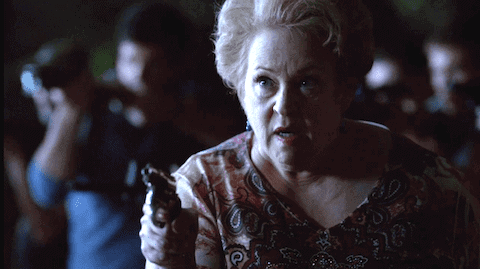 She better be careful, because Bon Temps has gotten a lot less friendly to vampires since Vince (Brett Rickaby) and the other easily-riled masses took up arms. Just ask Mayor Sam (Sam Trammell). He and his vamp run into the mob driving home, and Sam barely escapes alive after they kill his vampire. The mob left Adilyn (Bailey Noble) and Wade (Noah Matthews) locked up back at the station, but Andy (Chris Bauer) and Jessica (Deborah Ann Woll) free them (just before Adilyn and Wade  indulge in a little teenage makeout). Next stop is Jason Stackhouse (Ryan Kwanten)’s apartment to warn him that the easily-riled masses are targeting anyone who’s different — including, potentially, Sookie (Anna Paquin). Jason and Violet (Karolina Wydra) put a pin in the argument they were in the midst of (she thinks he’s a wimp for wanting kids) and head out with Andy and Jessica. They run into the rogue, trigger-happy townsfolk, where Mrs. Fortenberry (Dale Raoul) wants to settle some scores. She shoots Jessica in the shoulder, which prompts Violet to fwoosh on over and tear out one of Mrs. F’s organs (an important one, too, because she dies pretty quick). The townsfolk scatter.

Remember how it seemed like Sookie was cooking up a terrible plan? To ascertain the whereabouts of the missing Bon Temps residents, Sookie plans on luring the H-vamps over with her sweet, sweet faerie blood. Then, she’ll let herself get kidnapped and alert Bill (Stephen Moyer) to the location using the vampire magic blood tracking trick. Apparently, after the other vamps drank Billith’s blood last season, it drained him completely, thus breaking his connection to Sookie and also giving them a pretty good opportunity to start over. He feeds her a little of his new and improved Bill blood and they begin to wait. 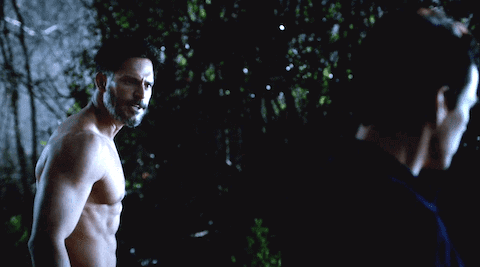 While they’re killing time waiting for Sookie to be kidnapped, they have a little girl talk. Sookie loves Alcide (Joe Manganiello), it’s just the he loves her so much more. Let me repeat that: Sookie (an idiot) doesn’t love Alcide (a doting, near-perfect specimen of a man) as much as he (the nicest guy on the show — last season's bizarre detour to jerkdorm, notwithstanding) loves her (the one with all the terrible plans). What a dummy! When the H-vamps do show up from their hunt (with a glamoured Holly in tow), Alcide and Sam (both in their canine forms) leap out, along with Andy, Jessica, Violet and Jason. They take out all the H-Vamps, but then — BANG! BANG! — Alcide is shot by some of the easily-riled masses. R.I.P., Alcide. We hardly got to see your butt nearly enough.

Were you shocked by Alcide’s death? What’s your take on Sarah Newlin?

Previous Post: « TSA May Stop You from Boarding Your Plane if Your iPhone isn’t Charged
Next Post: Study Finds Gay Marriage Could Bring Arizona $62 Million »