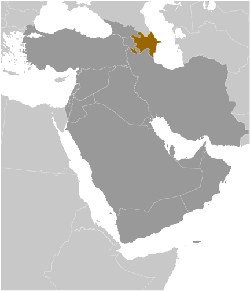 An 18 year old boy from Azerbaijan has reportedly escaped alive after his parents tried to burn him to death upon learning that he is gay. Though accounts of the horrendous attack have protected the identity of the victim, referring to him only as 'Malik', the boy reportedly still faces danger as do many LGBT individuals in Azerbaijan. Gay Star News reports that Malik endured three months of blackmail from anonymous individuals on Facebook who threatened to send pictures of him at a Pride parade to his parents:

[Malik’s] parents attempted to burn him with gasoline,’ the LGBT Azerbaijan Alliance reports, adding they punched and kicked him.

‘Even though [Malik] ran away from home, a lot of his personal belongings and documents were taken away by his family….meaning he has no chance to leave the country.’

‘[Malik] is in a safe place right now. However, a threat to his life continues.’

Earlier this year, Isa Shakmarli, an LGBT rights advocate and activist in Azerbaijan, hung himself with a rainbow flag, leaving behind a message on Facebook that only hinted at the harsh conditions gay people face in Azerbaijan:

“This country and this world are not for me…You are all guilty for my death. This world cannot handle my true colours. Goodbye.”