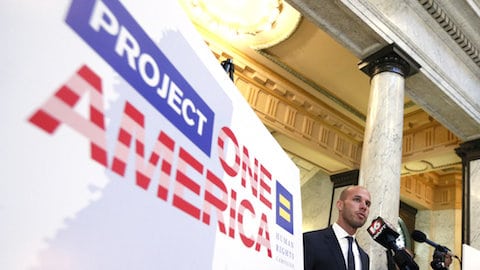 Of all the places in the U.S. that are resistant to social change, and gay equality in particular, the Deep South tops the list. As such, Alabama, Mississippi, and Arkansas have now become the focus of the Human Rights Campaign's Project One America. One of the problems in the Deep South is that people don't talk about homosexuality, so the Project will consist of a series of "summer conversations" to try to educate, inform, and open minds. Not unlike Harvey Milk, the HRC is tired of the silence, so they're going to talk about it.

The HRC will have its work cut out for it, though, given that their message will be running counter to people like Rev. Phillip Gandy, a Mississippi state senator and author of the state's "license to discriminate" against gays bill, who could take home the gold in the Mental Gymnastics competition:

If you're a real Christian, a follower of Christ, you're going to love people. And you love people where they are. You may not agree with people, but that doesn't mean that we judge them and say you've got to be like we are. Some have asked what I thought of gay marriage. I don't really have a thought. Scripture has spoken on that. Marriage is between a man and a woman.

Rhetorical fallacies abound. You can listen to NPR's coverage of the story AFTER THE JUMP…

If audio does not play, link can be found HERE.