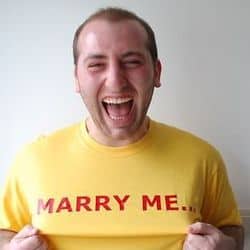 Mischa Badasyan plans to have sex with a different man every day for a year in the name of art. The Berlin-based human rights activist turned performance artist is using his body to shed light the intersection of loneliness and desire created by modern hookup culture. Using gay social apps like Grindr and a variety of websites built to connect guys looking for quick flings, Badasyan’s project, “Save The Date,”  wants to explore French philosopher Marc Augé’s concept of “non-places.”

"He was writing about non-places in the big cities; places like supermarkets, shopping malls, airports, motorways,” Badasyan explained to PolicyMic. “[H]e says that people lose their identity, there's no communication, people don't feel a belonging to somewhere and that causes the loneliness of people."

By having anonymous sex in public settings like cruising areas, Badasyan says, he himself will become like a non-place, and reconnect with an aspect of gay male culture that is unique to them:

“Straight people don't have these kind of applications, so many gay chats, in terms of cruising, sex clubs, sex bars, they don't have as many opportunities as gay people."

Sex positive support for Save the Date has been widespread, as Badasyan is using the project as an opportunity to spread the word about safe sex and proper condom use. Save the Date is slated to begin in September.