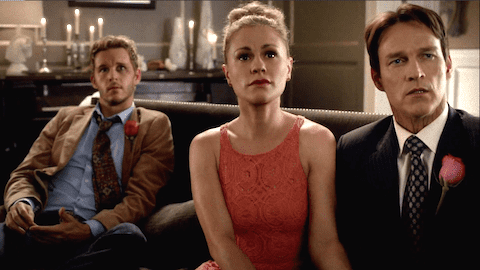 And with that, True Blood's seventh and final season has come to an end. Who lived? Who died? Who suddenly became a lesbian cage fighter?

Sink your fangs into our recap, and share your thoughts on the series finale, AFTER THE JUMP …

We pick up right where we left off last week, with Bill (Stephen Moyer) darkening the doorstep of Sookie (Anna Paquin). He gives her the rundown on why he thinks it’s a super swell idea for him to not take the cure. She deserves a normal life and she can’t have that while he’s still around. Sookie, however, ain’t buying it. He wants to die just because she has low self-esteem? Not a great pitch.

But that’s not all! Not only does he want to die, he wants her to kill him! And not just kill him, but to use her Mortal Kombat “Finish Him” special move, and kill him with her magic faerie light ball, rendering her human. Sookie has hopped around half the laps in Bon Temps, mated with most of the encyclopedia of supernaturals, put almost all of her loved ones in nearly daily peril, but this actually might be the most selfish thing to ever happen on this show. Sookie takes it under advisement.

Across the cemetery, at Chez Compton, Jessica (Deborah Ann Woll) and Hoyt (Jim Parrack) have returned. Jessica has a very sweet message for Bill: She’ll be fine. He doesn’t have to worry about her. But Bill’s still on his All About Me World Tour. So, he’s like, “You know what? That’s great that you decided to be the bigger person and come home and try and make me feel better, but you know what would really make me feel better? If you and Hoyt — despite him not remembering you beyond the last few days — just go ahead and get married.”

Jessica calls Bill into her room so she can be all “Dad! You’re embarrassing me!” But hear him out! He only wants to rush Jessica off to marriage because he missed his daughter’s wedding. In that case, Jessica is totally on board. Let’s do it right now!

She calls Sookie (who’s seeking council from her brother about the whole kill Bill thing) and asks her if she’s got a white dress she could borrow. While they’re on the phone, Hoyt calls Jason (Ryan Kwanten) to ask him to be his best man. 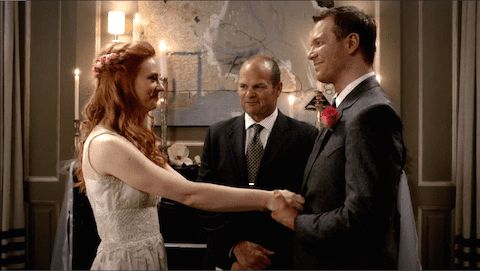 Arlene (Carrie Preston), Holly (Lauren Bowles) and Andy (Chris Bauer) also made the guestlist. Once they arrive, Father of the Bride Bill calls Andy into his office. Since Andy is Bill’s last living relative (remember they’re related?), he’ll inherit Bill’s estate. Bill asks Andy to rent his house to Jessica and Hoyt for a dollar a month, (but maybe not even that much sometimes), and Andy agrees, and then we watch them run a credit check and get Hoyt’s references and sign the lease because, oh god, this is boring. Wasn’t there a way to leave Jessica the house without having to dive into Vampire estate law? Did we really need some kind of sloppy, heavy-handed Edie Windsor-ish metaphor?

And speaking of heavy-handed metaphors! This ceremony! It’s sweet up until Andy, who is officiating, gives a little “even though vampire-human marriages aren’t recognized … “ You guys. We get it. WE GET IT. Regardless, now Hoyt and Jessica are kind-of, sort-of married. Mazel. 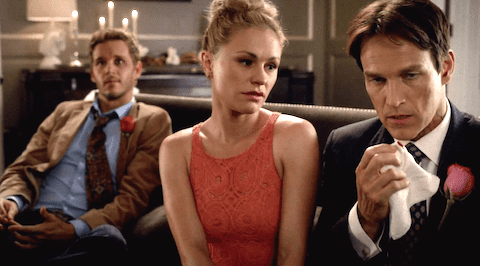 The real interesting thing about the ceremony is that Sookie can hear Bill’s thoughts. That’s odd! Less surprising: He’s just thinking a lot of lovey-dovey things about Sookie.

In addition to going to her brother for advice (he didn’t have any to offer), Sookie also talked to her pastor and had a vision of Gran. The flashback featured a young Sookie and Tara talking about boys, when Gran interrupts to tell Sookie she can have whatever kind of life she wants. After dropping off Jason with Brigette, she calls Bill to tell him she’s made her decision.

(By the way, Sookie tells Jason to sleep with Brigette. Brigette turns up for her “ride to the airport” with no luggage and wearing a short skirt, even though she’s supposed to go back to Alaska. Girlfriend knew what she was doing*.) 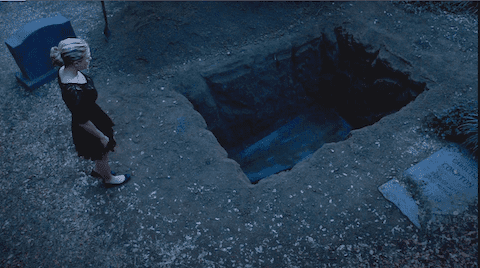 Her mind made up, Sookie meets Bill in the graveyard. He climbs in the grave, opens his coffin, and marvels at the old photo of him and his daughter. He lies in the coffin, while Sookie stands over the grave mustering up her faerie ball. At this point, I’m convinced that Bill is actually just becoming human. That’s why Sookie heard his thoughts, and I’m pretty sure I’ve talked myself into believing that his tears over his daughter’s photo were a little more human-like tear than just blood-like tear. Maybe it was Lillith’s blood or Sookie’s, but I was sure Bill was going to be human, Sookie’s vampire-killing faerie ball wasn’t going to work and they would live happily, humanly ever after. 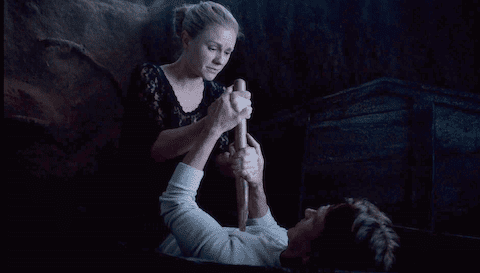 Once she conjures her glowball, she has an independent woman moment and realizes she doesn’t want to give up who she is for some man, even if that man is a vampire/former god/her true love/whatever. Bill still wants to die, though. Sookie grabs a shovel, cracks it into a stake and climbs into the coffin. She places it over Bill’s heart, he places his hands on hers and drives it in. Goodbye, Bill! You were pretty important! Now, what of Pam (Kristin Bauer van Straten) and Eric (Alexander Skarsgård)? After giving up Sookie’s address to the Yakuza, Eric has himself a plan. He’s going to release Sarah Newlin (Anna Camp), give her a little of Pam’s blood so they can track her, and set her free out the Underground Railroad tunnel in Fangtasia. Then, once Mr. Gus (Will Yun Lee) goes into the tunnel after her, they send a fireball in after him and that’s the end of that. They kill the Yakuza guards at Fangtasia, and then Eric makes short work of the crew waiting at Sookie’s. 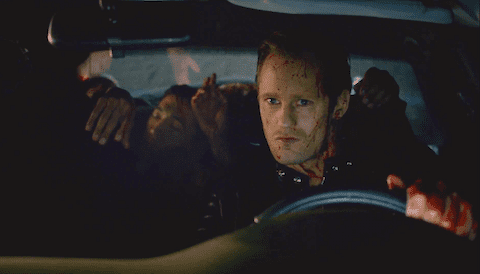 Pam hunts down Sarah and finds her eating garbage while hiding in a carousel. Sarah tries to win Pam over by offering to become her lesbian vampire sex slave. Pam is smarter than that. She’s smarter than all this. No deal.

One year later, Pam and Eric are hawking New Blood on an infomercial. Three years after that, they are successful tycoons ringing the (nighttime?) bell at the New York Stock Exchange. 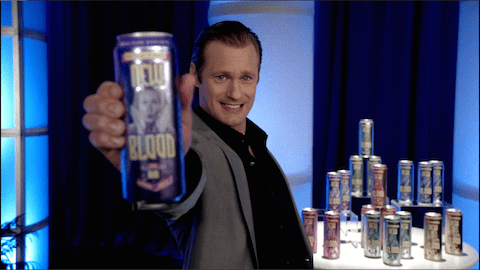 But don’t think they’re sell-outs. Just because they look like fat cat one-percenters, doesn’t mean they’ve lost all their edge. They’ve still got Fangtasia, and they keep Sarah Newlin in the basement, charging $100,000 for a minute drinking her blood. Pam turned her out just like she promised. Once the room clears, and Sarah is left alone, we see that she’s lost her damn mind and is constantly haunted by the ghost of her ex-husband, Steve Newlin (Michael McMillian).

Then we get a little epilogue, featuring a Thanksgiving dinner with all our friends. Jason ended up having a mess of kids with, ugh, Brigette. Hoyt and Jess are still together. As are Holly and Andy, Wade (Noah Matthews) and Adilyn (Bailey Noble), Lafayette (Nelsan Ellis) and James (Nathan Parsons) and Arlene and her vampire friend. Sam (Sam Trammell) shows up with Nicole (Jurnee Smollett-Bell) and their kid. And then there’s Sookie. Pregnant Sookie! Talking to her man! But who is it? Is it Eric? Ghost Alcide? (Don’t put it beyond them.) Nope! It’s just some dude we barely see. A nobody. Probably not a werepanther or nothing. 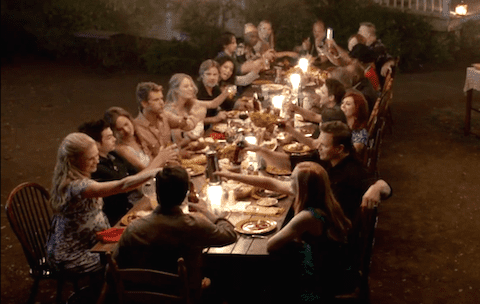 I get it. Sookie is about more than the men she sleeps with. #YesAllFaeries, #shewokeuplikethis, etc. It’s a good message (I guess), but when you’ve built seven seasons around the love triangles (and squares and trapezoids and octagons), it’s a little cheap (and lazy) to then be like IT WAS REALLY ABOUT HER FINDING HERSELF without actually, you know, telling a complete story about her finding herself. If you really want to make a show about her journey, then why didn’t we spend more time showing her acting like an empowered woman and less watching her throw herself into the arms of Bill, Eric, Alcide, Sam and Warlow? It’s not very impressive to declare this character isn’t defined by her relationships in the last 10 minutes of a series that was almost exclusively defined by those very relationships.

And that will be my last formal complaint about True Blood probably ever.

Farewell, True Blood. I will look back on your first season (and any time Jason Stackhouse was shirtless) fondly.

What did you think of the finale?

(*Yes, I know her stuff was probably at Hoyt's mom's house.)