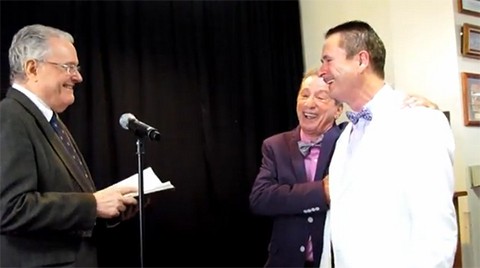 Longtime LGBT rights activist and friend of Harvey Milk Tom Ammiano recently wed partner Carolis Deal in San Francisco. Ammiano, a California assemblyman, reportedly brought guests together at the Delancey Street Foundation without too many clues as to the precise nature of the event. From the San Francisco Sentinel:

So after several songs from jazz singer Paula West starting out with “Thanks for the Memories” and including “Anything Goes” and “Night and Day” both by Cole Porter, there was a video of Tom accomplishments as a political leader at the Board of Supervisors and at the State legislature. After his response to the video Tom introduced Harry Britt and announced that Harry would preside over his wedding to Carolis Deal

Watch a video tribute shown at the wedding, chronicling Ammiano's many accomplishments over the years, AFTER THE JUMP…