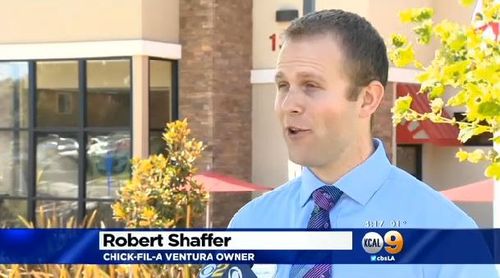 A Venture County, California high school has barred a booster club from selling Chick-fil-a sandwiches on campus because of the company's position on gay marriage.

In the past, the fast food chain's CEO Dan Cathy has made his displeasure with LGBT equality well-known, including saying that America is "inviting God's judgement" by letting gays marry.

Ventura High School Principal Val Wyatt told the Ventura County Star that the football booster club could not sell Chick-fil-A sandwiches at Wednesday’s back-to-school night because the restaurant’s beliefs could offend some students and their parents.

“With their political stance on gay rights and because the students of Ventura High School and their parents would be at the event, I didn’t want them on campus,” Wyatt told the newspaper.

Every principal has the discretion to invite community groups or businesses onto their campuses.

“We value inclusivity and diversity on our campus and all of our events and activities are going to adhere to our mission,” Ventura Unified School District Superintendent Trudy Tuttle Arriaga said.

Check out CBSLA's report on the story, including reactions from parents and students on both sides of the issue, AFTER THE JUMP…

Previous Post: « Nick Jonas Will Be Nude And Possibly Gay For His Upcoming Role in ‘Kingdom’ – VIDEO
Next Post: Michael Cera and Kieran Culkin Open On Broadway in ‘This Is Our Youth:’ REVIEW »