Several gay asylum seekers in Australia who fled persecution in their home countries could be resettled in Papua New Guinea, where homosexuality is punishable by up to 14 years in prison 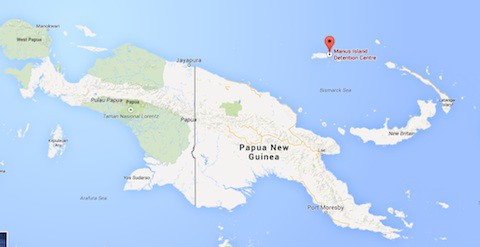 Several gay asylum seekers in Australia who fled persecution in their home countries could be resettled in Papua New Guinea (PNG), where homosexuality is punishable by up to 14 years in prison, reports Time.

The asylum seekers are currently being held by Australian immigration on Manus Island in PNG, where they could eventually live permanently.

The Guardian claims to have seen six letters written in Farsi by four gay Iranian men in the detention center which appear to detail persecution in their home country and the fear of being resettled in PNG. The authenticity of the letters has not yet been confirmed.

In a suicide note to his mother, one of the men wrote: 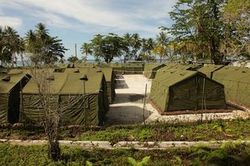 “I couldn’t return to Iran and be executed by the Iranian government. Hence living in PNG was not any better, because being gay is considered a crime in PNG as well, and the punishment for such crime is 14 years imprisonment.

“I am so sorry that I was born gay. I never meant to hurt you, mum.

“I wish our boat had sunk in the ocean and stopped me living the most painful year in my life.

“I thought Australia and its people would be my protector, but they taught me otherwise.”

The Guardian also obtained a copy of a Salvation Army orientation presentation shown to asylum seekers on Manus which shows a picture of two men kissing with a large red cross through it. The presentation warns:

“Homosexuality is illegal in Papua New Guinea. People have been imprisoned or killed for performing homosexual acts.”

According to Graeme McGregor, Amnesty Australia’s refugee-camp coordinator, the human rights group has “consistently raised the issue of gay men on Manus” with Australian immigration but “never had a clear response."

Ben Pynt, director of Humanitarian Research Partners, says there are around 36 gay men detained at Manus and several others who are too afraid to reveal their sexual orientation.

Australian Immigration Minister Scott Morrison said in December he was unaware of any claims of homosexuality among Manus inmates.

Morrison has also denied allegations in a December report by Amnesty International that detainees at the facility have been told that anyone found engaging in homosexual acts will be reported to the PNG police.

Earlier this year the United Nations High Commissioner for Refugees raised concerns about the living conditions for asylum seekers being held at the Manus Island detention center.

Read two of the asylum seekers' letters, AFTER THE JUMP…

Previous Post: « Towleroad Guide to the Tube #1623
Next Post: Some Things Never Change: The Values Voter Summit and the Dubious ‘Rebranding’ of the GOP »