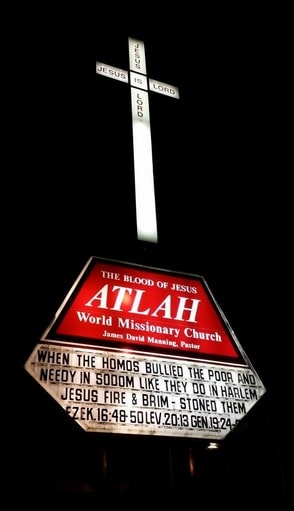 Pastor James David Manning of ATLAH World Missionary Church in Harlem is back with another offensive, homophobic, and frightening sign. Manning previously warned African-American women that President Obama was responsible for unleashing white gay men on their husbands, and he whole-heartedly believes in the use of the word "faggot." Under a towering cross stating "Jesus is Lord," Manning has once again opted to spout hateful rhetoric and lies. 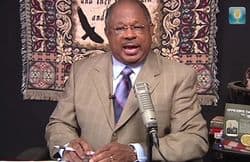 "When the homos bullied the poor and needy in Sodom like they do in Harlem, Jesus fire and brim-stoned them," it reads.

Manning would have you believe that's a quote from the Bible.

Manning also believes that Michael Sam may marry a 9-year-old boy and that Barack Obama and Vladimir Putin are closeted homosexuals. It seems like someone may be losing touch with reality…

Previous Post: « Ellen Brings Us Some Good News (Amongst All The Bad) With Adorable Cat and Baby Videos: WATCH
Next Post: ‘How to Get Away with Murder’ Promises Lots of Gay Sex, and Here’s the First Taste: VIDEO »