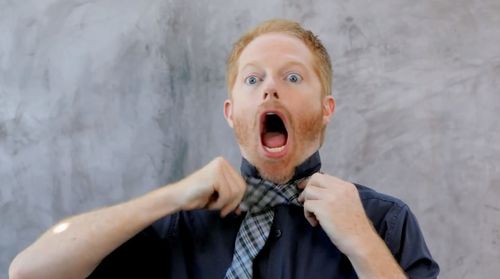 Funny man Jesse Tyler Ferguson is an established, out gay presence in Hollywood. He plays one half of recently married duo Cam and Mitch on Modern Family and married his own hubby, Justin Mikita, last July. Ferguson was not always so out and proud, though, and he recently shared his coming out experience with fellow comedian Aisha Tyler on her podcast "Girl on Guy."

Ferguson said that one of his stolen goods set off an alarm. The woman behind the check out counter then took him to a back room…and called his father.

Ferguson's father apparently had difficulty accepting his son's sexual orientation, but that did not stop him from giving an emotional speech the night before Ferguson and Mikita's wedding.

"It was a process for him as well. It was sort of a coming-out process, and he had to figure out how to deal with having a son that wasn't the ideal son that he had," [Ferguson] told Oprah Winfrey last year.