Julia Volkova, one half of fake lesbian duo t.A.T.u, said in a recent interview on Russian television that she “would condemn” her son if he came out 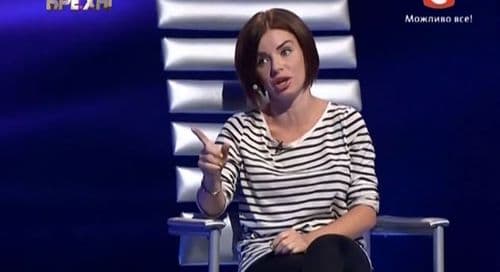 Julia Volkova, one half of fake lesbian music duo t.A.T.u, said in a recent interview on Russian television that she “would condemn” her son if he came out, reports Pink News.

Volkova, who has previously spoken out against Russia’s anti-gay laws, added that although she could not accept a gay son, women should have the “freedom” to be gay:

“I would condemn him, because I believe that a real man must be a real man. God created man for procreation, it is the nature. The man for me is the support, the strength of… I won’t accept a gay son.”

Confirming that she only thinks the “freedom” of being gay should apply to women, Volkova explains that real freedom for a man is to have sex with as many women as he can:

“In our time, there is a very large number of frivolous girls…a man can be with a large number of these girls. This is freedom for men. And a man has no right to be a fag.”

Volkova goes to on tell the audience that she in fact has “many gay friends" – and that their sexuality is clearly a choice, just like being a thief, a drug addict or a murderer:

“If you choose out of [being a murderer, a thief, a drug addict or a homosexual], being gay [is] a better than the rest.”

Volkova would know all about choice as her bandmate Lena Katina previously confirmed she is straight, and that the band’s lesbian image is an “act”.

Watch the confused interview, AFTER THE JUMP… (Note: Russian-language)

Katina, meanwhile, took to Facebook yesterday to weigh in on the controversy:

Hey, all! I am seeing some comments lately regarding my position about LGBT and my religion. I can say one thing: God is teaching us to live in love, to be tolerant and not to judge other people! And I do so! Love is love and it is a wonderful feeling! I think everybody should be free to love who they love and be with who they want to spend their life with! Xoxo