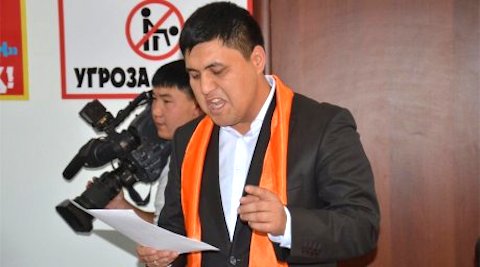 A Kazakhstan politician has said that gay people can be easily identified by blood testing for “degeneracy,” reports Tengri News.

Dauren Babamuratov, leader of the Bolashak national movement, made the comments at a press conference calling for laws banning LGBT people from spreading “propaganda,” taking public office and serving in the military.

According to TengriNews, Babamuratov said:

“I think it is very easy to identify a gay person by his or her DNA. A blood test can show the presence of degeneratism in a person. Unfortunately, suppressing activities of the LGBT community in Kazakhstan is extremely difficult, because there is no law in our country prohibiting this type of activity, that is, the promotion of homosexuality.”

At the same press conference, Sanzhar Bokayev, the Head of the Youth Policies Department in the country’s largest city Almaty, said that Kazakhstan's gay community was "supported and funded from abroad" and is now “a big problem that concerns our society,"

However, activist and journalist Zhanar Sekerbayeva said “there is no gay ‘propaganda’ in Kazakhstan, but there is homophobia. The question of gay marriage in Kazakhstan has never been on the agenda. There have been no public speeches or gay pride parades. There is only homophobia and discrimination of women.”

Viktoria Tyuleneva, the Director of Freedom House in Kazakhstan added that if new anti-gay laws are adopted, “Kazakhstan will face grievances at every international forum it attends, and this will draw a squall of criticism from all international organisations.”

Last weekend, Babamuratov took to Facebook to defend his views regarding gay "propaganda":