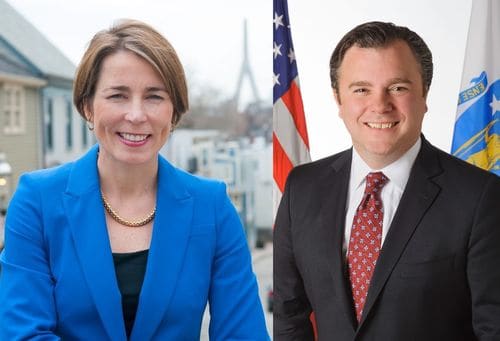 On Tuesday night, two openly gay candidates secured their party's nominations in the Massachusetts primary, paving the way for a history-making election night on November 4th.

Maura Healey (top left) beat out former state senator Warren Tolman to become the Democratic nominee for attorney general. Steve Kerrigan (top right), became the Democratic lieutenant governor nominee alongside gubernatorial candidate Martha Coakley. If Healey and Kerrigan are elected this fall, they would be the first LGBT people to hold their respective positions in the United States.

“As an advocate, as a prosecutor, and as a civil rights attorney, you have got to make your case and you have it give it all of your heart,” Healey said in her victory speech. “We have made our case tonight.”

As an assistant attorney general in the Massachusetts Attorney General’s Office, Healey played a key role in the state’s fight against the Defense of Marriage Act, arguing against DOMA’s constitutionally at the 1st Circuit Court of Appeals in 2012.

Kara S. Coredini of MassEquality was thrilled with the primary's outcome:

“Tonight was a tremendous night for LGBTQ justice and equality. Voters saw Steve Kerrigan and Maura Healey for what they offer and not solely who they are — and both won by resounding margins. For the young LGBTQ people growing up anywhere in Massachusetts and anywhere in the country, the people of Massachusetts have said to them tonight, it’s what you do that matters, and we celebrate who you are…

Massachusetts is poised to shatter several glass ceilings after tonight. Our first elected female Governor of Massachusetts, our first openly gay Lieutenant Governor and state Attorney General in Massachusetts and the country, and the second female treasurer in the Commonwealth’s history, which is a great accomplishment given the glass ceiling that has existed for women in politics, both statewide and nationally. They will bring to the job the wisdom and insight of the lives they’ve led, and they will give hope to all that follow.”

Congratulations to Healey, Kerrigan, and Coakley!