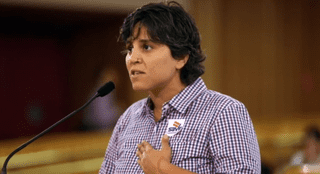 The Commission attempted to pass a similar amendment last year, but found itself unable to find the necessary number of committee-level approval votes that would have brought the law to the floor for review. Proponents of the revision expressed their need to further educate the public of the law’s necessity before redoubling their efforts.

“It’s fairly apparent the education failed and the politics failed,” said Mara Kiesling, director of the National Center for Transgender Equality. “They now know who they need to educate and who they need to advocate with.”

After being shut out of a vote last year, supporters of the expansion came to the Miami-Dade County Hall prepared to defend themselves against a vocal opposition. Instead, as SAVE field organizer Charo Valero discovered, most of the people in the County Hall were preoccupied with film industry tax rebates. SAVE, a Miami-based LGBT organization, has been pushing for broader protections for Miami's trans communities.

“This update that we’re working on would ensure very basic protections for a very vulnerable part of our community that many take for granted," Valero explained to the Miami Herald.

Watch an interview with SAVE field organizer Charo Valero, AFTER THE JUMP…