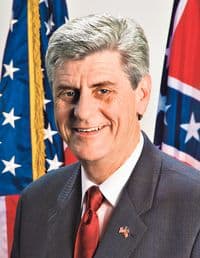 Mississippi Governor Phil Bryant (R) is opposing an appeal from a lesbian woman who is asking the state’s supreme court to recognize her gay marriage performed out of state so the state may subsequently grant a divorce. Bryant is being represented by the Christian legal group Alliance Defending Freedom. The Clarion-Ledger reports:

The high court said Monday that it would hear the case instead of assigning it to the Court of Appeals. Tuesday, justices approved Bryant's motion to intervene. It's unclear if the court will hear oral arguments or when it might rule.

In 2013, DeSoto County Chancery Judge Mitchell Lundy Jr. ruled that the Mississippi Constitution and statutes prevented him from granting a divorce to Lauren Czekala-Chatham and Dana Ann Melancon.

The women married in San Francisco in 2008 and bought a house in Mississippi before separating in 2010. They could divorce in California, but Czekala-Chatham says she shouldn't be treated differently than straight couples.

Just last month, the campaign for Southern Equality urged same-sex couples in Mississippi to petition their local government offices to recognize their out-of-state unions, and at least one Mississippi couple was successful. It is unclear how that might affect the court’s ruling if at all.

Wesley Hisaw, Czekala-Chatham's lawyer, did mention that the U.S. Supreme Court may have an impact on this lower court decision. You’ll recall, SCOTUS will review five same-sex marriage cases behind closed doors on September 29.