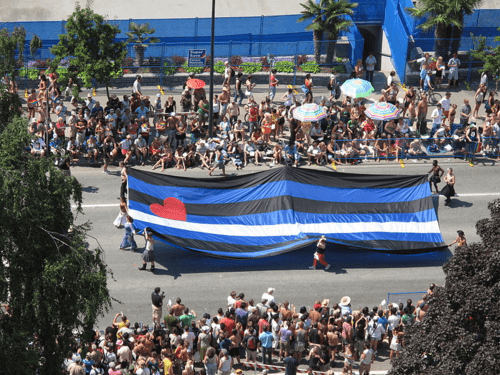 #WhyIStayed and #WhyILeft have gone viral on Twitter since the Ray Rice domestic violence revelations. Our friend David M posted his story of surviving domestic abuse on Facebook earlier today and has given Towleroad permission to share it.

I was helped by several wonderful people when I was a homeless boy, discarded by my LDS family. There was Jim, the leatherman who introduced me properly to the leather scene, the man from whom I earned my first leathers. And there was Miss Gladys, the Black trans sex worker who took me in and gave me a home for a time, who was to me like a mother, and who made the best fried chicken I have ever had.

Then there was Paul. He gave me a place to live, too. But it came at a price. He beat me, raped me, abused me emotionally and financially, and lent me out to his friends. All under the guise of a BDSM relationship, which I wanted desperately. He taught me I had to start out living as his slave if I wanted to be in the scene. I was young and stupid and I believed him. I thought it was normal. And I was afraid of being back on the street, where I was already being raped and abused, anyway. That's #WhyIStayed, far too long. But one day I found the courage to leave.

We were watching tv downstairs by the pool. I locked him into the room, went upstairs and threw my clothes into a bag, and walked out the door. I had no money, no friends, nowhere to go. But I walked out. I walked 50 miles to Tampa where I knew there was a leather bar and other leathermen. That weekend, I went to the local bar, and I started telling people my story. I met Jim, who I mentioned earlier. Jim was an old school (some would say Old Guard) leatherman. He gave me a place to live, and this time there were no strings attached. I would have slept with him; I was used to sleeping with men for food or shelter. But for the  year I lived with him, he never touched me. He taught me how to have a healthy, consensual leather relationship. He taught me the difference between BDSM and abuse. But back to the story…

A few months after I had left, I was at the bar, this was the 2606 in Tampa which some of you may know. Jim was not with me, so I was alone when Paul walked in and tried to get me to leave with him. After being afraid of him for so long, I wasn't afraid any longer. I yelled at him; I told him I was going nowhere with him.

The music kept playing, of course, but all around me men went quiet and turned toward us. The pool games stopped. The tension in the room was palpable. Paul grabbed me by the arm and began to pull me toward the door. And suddenly, something magical happened. The leathermen in that bar closed ranks in front of us. And all around us. Tampa had a small leather community, just the one bar, so I already knew these men, and they knew my story. They knew who Paul was and why he was there. As ethical leathermen, they stepped up to protect me.

Paul didn't really understand what was going on, but for the first time I saw fear on *his* face. I experienced a sudden realization of how small and pitiful he really was. I pulled my arm from his grip. I was shaking not with fear but with anger; I leaned in close to him and I told him that these were my friends, that this was my bar, and that he was not welcome here. He should leave, and never come back. He never did.

To this day I still ask myself #WhyILeft. But I really don't know. Why was it that one day I suddenly had the courage that I had never had before? I don't know. I'm just glad I did. I wish I had done it much sooner.

From time to time Towleroad runs first person stories spotted on social media we think will be of interest to the broader community. Hat tip to Jim Landé for spotting this one. If you come across a particularly timely, moving, amazing or otherwise worthy post, please let us know through our contact form or drop us an email at tips at towleroad dot com.

Previously in this series:
How Three Restaurant Workers Restored a Gay Man's Faith in Humanity [tlrd]

Previous Post: « Bear Cub Takes Playtime On The Putting Green: VIDEO
Next Post: 24,000 Transgender People May Be Ineligible To Vote In November Due to Voter ID- VIDEO »