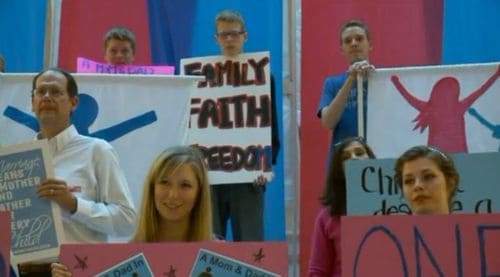 A group of several hundred anti-gay protesters showed up at the Utah State Capitol on Thursday to voice their opposition to both gay marriage and gay adoption, The Salt Lake Tribune reports:

Supporters of man-woman marriage holding signs declaring "biology is not bigotry" and "two moms don’t equal a dad" cheered long and loud as conservative activist Mary Summerhays [pictured] projected on a screen images of same-sex couples and their children.

"This child has a mother," she said, as an image of Matthew Baraza and Tony Milner filled the screen. In it, the two men were holding their son Jesse. "These are the faces of the children who will pay the price of redefining marriage." […]

Summerhays, who leads the organizing group of Thursday’s rally, Utah Celebration of Marriage, said these children were among the chief reasons several hundred people gathered under the painted dome of the Utah State Capitol: to demonstrate to local and national officials, to media and onlookers that there is still support in Utah for so-called "traditional" families, made up of one mother and one father.

Gay rights supporters also showed up to voice their own opinions on the matter.

Watch a FOX 13 report on the rally, AFTER THE JUMP…

Next week, the Supreme Court will consider seven petitions from five states – Utah, Oklahoma, Virginia, Indiana, and Wisconsin – on whether those states' gay marriage bans are unconstitutional.