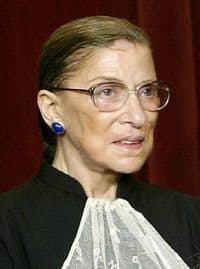 On Tuesday, Justice Ruth Bader Ginsburg dropped some hints about the Supreme Court's plan of action on the issue of gay marriage. In a talk at the University of Minnesota Law School, the Justice said people should look to the Sixth Circuit Court of Appeals as an indicator for when the Supreme Court will address marriage equality.

[Ginsburg] said 'there will be some urgency' if [the Sixth Circuit] allows same-sex marriage bans to stand. Such a decision would run contrary to a legal trend favoring gay marriage and force the Supreme Court to step in sooner, she predicted. She said if the appeals panel falls in line with other rulings there is 'no need for us to rush.'

Ginsburg also noted what she described as a "remarkable" shift of public opinion on gay people, and she gave her theory on why this is, saying: "Having people close to us who say who they are — that made the attitude change in this country."

It wasn't only shoptalk during Ginsburg's appearance, as she let her hair down and showed the audience her playful side. She touched on her friendship with Antonin Scalia, joking about her plans for a comic opera entitled "Scalia/Ginsburg."

The audience really fell out when Ginsburg put the "supreme" in "Supreme Court" by sharing her true dream job:

If I had any talent God could give me, I would be a great diva.