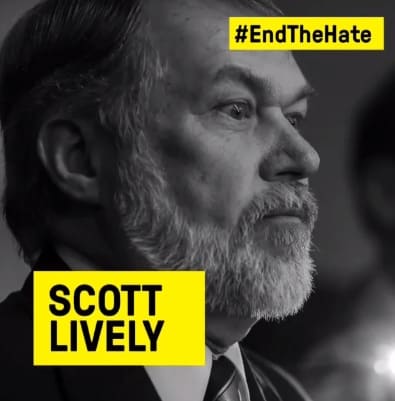 Anti-gay troll Scott Lively is speaking out against the HRC's newly released report titled The Export of Hate – which exposes some of America's most vitriolic anti-gay activists and their work promoting bigotry abroad.

Naturally, the report provides extensive coverage of Lively's international efforts in Uganda, Europe, and Russia – but Lively just sees it as the HRC putting a "hit" on him and the other big name bigots in the U.S.

I believe they are now deliberately trying to incite murder against me and every other person on their enemies list.  That might have sounded a bit paranoid in years past, but post-Corkins it is just cold hard fact that some “gay” activists are incited to murder by inflammatory leftist rhetoric.  The HRC knows that, and yet their rhetoric in this Exporting Hate publication is MORE inflammatory than the SPLC’s rhetoric the drove Corkins over the edge!

Because I am a Bible-believing Christian I am not afraid of death.  But neither am I volunteering for martyrdom.  As of today I am for the first time going to start taking precautions against the possibility of being assassinated by agents of the LGBT movement.  For one thing, I will no longer publicize my travel schedule in advance.

And I am demanding a retraction and public apology from both HRC and SPLC.  To both of them I insist: STOP INCITING HATE BEFORE YOU GET PEOPLE KILLED!!!!!

There's a sad irony to Lively's last sentence, considering the abundance of hate he has incited abroad that has undoubtedly contributed to actual deaths – those of innocent LGBT people.

You can read his vile column in full, HERE.

Previous Post: « Here is Annie Lennox Delivering a Wicked Cover of ‘I Put a Spell on You’: VIDEO
Next Post: Rep. Robert Pittenger (R-NC) Says Firing Gay People Is a ‘Freedom We Enjoy’ – VIDEO »